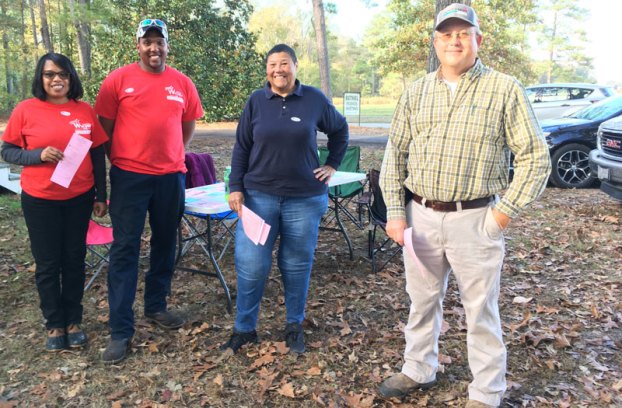 Outside the voting site in Bethel Friends meeting are, from left, Margie Bailey and Josh Wyche Jr., who handed out literature to support Wyche Sr.'s campaign to become the next sheriff of Southampton County. Earva Sumblin Jones, a candidate for the Franklin District, made herself available to talk to voters, as did Anthony Cuthbertson, who was there in support of his wife, Jennifer, who campaigned to become the next Commissioner of Revenue. -- Stephen H. Cowles Tidewater News 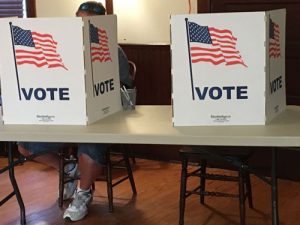 Many hope for ‘a shake-up’ in leadership

Cindy Sanford is confident in her choices on Election Day.

“All the ones I picked are going to win,” she said matter-of-factly after voting in the Bethel Meeting hall. Sanford also believe there will be major changes on the board of supervisors after the ballots are counted, and that suits her quite fine.

“Some shake-ups are going to happen,” she added.

Bethany Hermann also believes her picks will have a “very good” chance of winning, and she also looks forward to changes in the county government.

Nancy Cornwell is as sure of her decisions as Sanford, stating she’s “100 percent sure” they’ll win. Cornwell also anticipates “major changes for sure.”

A gentleman at the site who asked not to be identified said he thinks his choices could also win.

“I guess they stand a chance,” and then shared he also hopes for a “shake-up.”

At a table set outside away from the entrance, voters could meet candidates or their supporters to ask last-minute questions. Margie Bailey, a volunteer, described the day’s turnout as “Excellent! We’ve had far more [voters] than we ever expected.

Earva Sumblin Jones, one of three candidates for the Franklin District, figures that 600 people had already shown up by 3 p.m.

Anthony Cuthbertson, whose wife, Jennifer, is seeking to become the new Commissioner of Revenue, is no less optimistic about her chances.
“I’m confident. I really do believe she’ll win,” he said.

Inside, chief election officer Jo Anne Buchanan described the turnout as “steady” through the day. At 7 p.m., the announcement would be made that the polling station had closed. The doors would be locked, though anyone who was already in line would still get to vote. Buchanan said the results would be printed and call in the results to the registrar’s office.

As noted at the top of A1, the results would not be available by press time, but the winners would be announced online at www.thetidewaternews.com. Full details will be reported in the weekend edition.

Just outside the Newsoms Volunteer Fire Department, Ida Spruell said she is “positive” her choices will be victorious and she also anticipates “lots of changes … I hope so.”

Ronnie Mason later added he is also hopeful his candidates will win.

Lynda Upike, the sole candidate to become the next supervisor for the Newsoms District, figured about 300 people had come through, and heard from her daughter that Courtland had seen about 400 voters so far.

Inside, chief election officer Mildred Drake said the turnout there had been “Good. More than usual. We’ve been very busy since we got here. It’s been a wonderful turnout.” 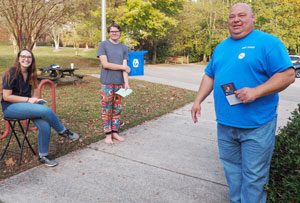 Shelby Cook sits outside the Ruth Camp Campbell Memorial Library in Franklin, which is the polling place for the city’s second precinct, campaigning for Southampton County sheriff candidate Tommy Potter. Next to her is Damion McElhenie, who was there to support sheriff candidate Josh Wyche and Democratic General Assembly Del. Roslyn Tyler and Sen. L. Louise Lucas. McElhenie said he had been standing outside the library since about 6:45 a.m., hence his current lack of shoes. To his right is Tim Dunn, who was campaigning for sheriff candidate Mark Turner. — Stephen Faleski Tidewater News

As of shortly before 4 p.m., just over 40 percent of the 939 registered voters in the city of Franklin’s second precinct had cast their ballots. Election officials at the Ruth Camp Campbell Memorial Library, which is the polling place for that precinct, described the turnout as being much higher than what is typical for a sheriff’s election or for state House and Senate.

Only about 9.2 percent of the Windsor precinct’s 2,171 registered voters had cast ballots as of shortly before 10 a.m., but even this was more than Kay Stephenson, chief election official for the Windsor Town Center polling location, said she had expected. 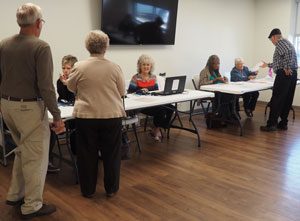 “It’s been steady; there’s been no time when we didn’t have voters,” she said.

In Walters, roughly 15 percent of the precinct’s 1,128 registered voters had already cast their ballots as of shortly after 10 a.m. Chandra Christmas, chief election official for the Walters Ruritan Clubhouse polling location as “above normal” for a state House and Senate election.

In the Carrsville and Camptown areas of the county, just under 13 percent of each precinct’s registered voters had cast ballots as of shortly after 10:30 a.m. Each of these precincts, prior to 2019, had been part of the 75th District, but now have joined the rest of Isle of Wight County as part of the 64th District as a result of federal court decisions in 2018 and this past February.

The 2018 court decision, according to a Feb. 14 article in The Washington Post, had ruled that 11 of Virginia’s House of Delegates districts in the Richmond and Hampton Roads areas had been racially gerrymandered — meaning designed to concentrate black voters and deprive them of representation. Then in February, again according to the Post, the U.S. District Court for the Eastern District of Virginia approved a map drawn by court-appointed expert Bernard Grofman, a professor at the University of California at Irvine, which more evenly distributed black voters and put more Democratic-leaning voters into districts held by Republicans. In June, the U.S. Supreme Court decided 5-4 to uphold the federal court’s ruling after hearing an appeal from Virginia House Republicans in March.

BOYKINS As of 10:36 a.m. Tuesday, all lanes of State Route 671 at the intersection of Tuckers Drive in Southampton... read more