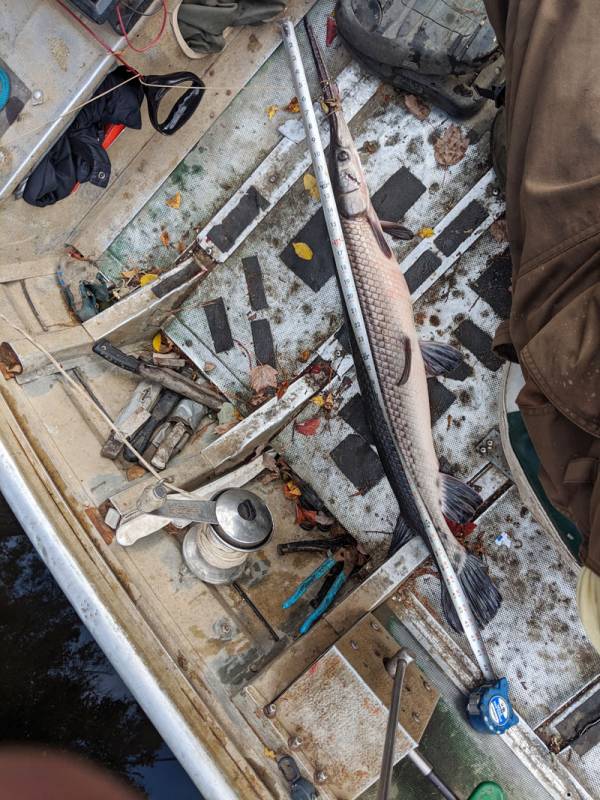 The RiverGuard caught this citation gar weighing in at 9.5 pounds and measuring 44 inches, but it did not come easily to him. On capture, the fish struggled such the fisherman was injured. -- Submitted Jeff Turner

Spirit of Moonpie and I spent the 28th through the 30th on the Blackwater below Franklin. The water was super-clear, normal level, leafy and 63 degrees.Air temps ranged from 52 to 70-degrees, very nice weather this late in the season.

Trash was very light on this trip, I only picked up about a quarter of a bag. I saw no other water quality issues. No abandoned limb lines or anything like that. The river was in very good shape.

The fishing on this trip was excellent especially for the catfish. I caught only six the two nights I fished, but they were all really big catfish. The biggest weighed 19 pounds and I brought home 15 pounds of fillets. Just so you understand, I only bait my lines once just before dark and then check them the next morning. I used to run the lines a couple of times during the night, but I don’t do that anymore for safety reasons. I would catch a lot more catfish that way, but it’s just not that safe for me anymore, plus I don’t need but so many pounds of catfish anyway!

I also caught a huge gar that weighed 9.5 pounds and was 44 inches long. That sucker got me when I was trying to weigh it. It went crazy when I picked it up with the weigh scales and something took a chunk out of my arm. Not sure really if it was the teeth on that fish or the very sharp hook that I put on the scales. So that’s another gar citation that got me injured. Hhaaaa! That’s 11, just for the record.

The other fishing was OK. I caught plenty of bream for bait, but did not do so well on the bass on topwater. Too many leaves on the water right now for that really, and yeah, I should have changed lures, but I’m stubborn!

The colors are beautiful right now on the river, if you want to see them you better go soon. It was such an enjoyable trip except for the gar attack and the skeeters. It was a very nice warm river patrol to be the end of October. I don’t expect the next time I go out it will be 70 degrees on the two rivers we call the Blackwater and Nottoway.

To contact the RiverGuard about river issues, email him at blknotkpr@earthlink.net.

Tree bark is as revealing as the leaves, fruit