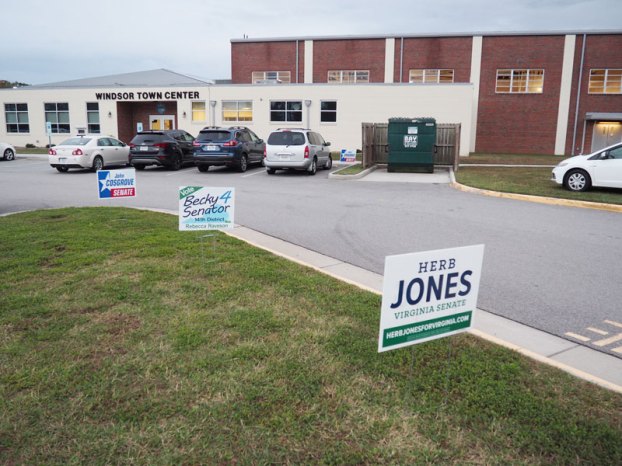 Campaign workers for each of the candidates placed campaign signs outside of the Windsor Town Center in preparation for the debate. Stephen Faleski | The Tidewater News 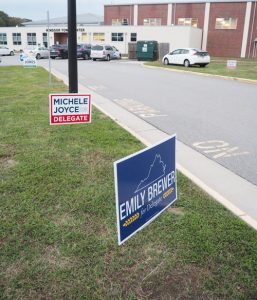 National controversies such as sanctuary cities and gun laws, as well as more localized issues such as how best to protect the Chesapeake Bay and family farms, came home to Isle of Wight County on Wednesday as candidates seeking seats in Virginia’s General Assembly this November faced off in a forum at the Windsor Town Center.

Standing in for state Sen. Thomas “Tommy” Norment Jr., the incumbent Republican for the 3rd District, was Jeff Ryer, press secretary for the Virginia Senate Republican Caucus. Norment’s Democratic challenger, Herb Jones, was unable to attend. Ryer explained that Norment and Jones were both participating in another debate at a different locality that evening.

When asked to list some issues on which she would focus if elected, Joyce, a certified volunteer health care marketplace navigator since 2014, highlighted the Affordable Care Act, which she described as “not a perfect law at all.”

“We have done a good job getting wage earners and those with low income [on ACA marketplace health insurance plans] but the folks with small businesses that make a little to much to buy into the marketplace, their premiums are still rising,” Joyce said, adding that prescription drug prices and the Medicare “doughnut hole” are still issues, despite the ACA.

She then said, “I think we should take district drawing and gerrymandering out of the hands of politicians.”

Brewer, responding to the same question, highlighted her work in reforming Virginia’s adoption and foster care system over her past two years in office, and agreed with Joyce that prescription drug costs were an issue.

When asked about ensuring the future of family farms, Ryer suggested incentives for farmers to continue farming, and “not having incentives for development.”

“A lot of it has to do with trade and the ability to get markets for our products,” she said.

Raveson then suggested an incentive program for farmers to grow hemp, the pulp from which she said can be used for fuel and in the manufacture of plastic bottles. Cosgrove then said that the General Assembly already legalized the growing of hemp last year. Brewer added she had signed onto the hemp legalization bill, and that the General Assembly had also worked on defeating what she called the “death tax,” so that when someone inherits a family farm, they aren’t hurt financially.

“This is a big concern of mine as well,” Joyce said, and suggested that farmers could dedicate a portion of their land for solar panels and use the steady stream of income that would result to invest in technology to make their farming efforts more efficient.

“There’s also agritourism,” she said. “We do want to keep that acreage and [families] with their farms they’ve had for generations.”

As one might expect, the Republican and Democratic candidates were not in agreement when asked about their position on gun laws and on sanctuary cities in Virginia, these being, according to a Washington Post definition, localities that declare they won’t assist in immigration enforcement and deportation.

“I absolutely do not support sanctuary cities,” Brewer said.

Joyce countered that she felt the purpose of sanctuary cities was so that illegal/undocumented immigrants would not be afraid to go to the police to report criminal activity.

“I do not think they [sanctuary cities] are the threat that they are portrayed to be,” she said.

“I’d like to know where the jurisdictions are where I can go to avoid specific laws,” Ryer added. “If I want to speed all the time, where do I go?”

Raveson, however, said Ryer’s statement was a “total mischaracterization of sanctuary cities.”

“It’s not like it’s a ghetto of criminals hiding in there,” Raveson said. “They [illegal/undocumented immigrants] contribute to our whole way of life, and it’s not fair to make them out as criminals.”

The moderators then brought up the special session of the General Assembly Gov. Ralph Northam had called to discuss new gun legislation following the mass shooting in Virginia Beach earlier this year, asking each candidate if he or she felt it was appropriate for the currently Republican-controlled House and Senate to adjourn until November without discussing or voting on any of the proposed gun bills.

Joyce added that she “wouldn’t have a job” anymore, if she were to refuse to have a discussion with one or more people at work with whom she disagreed.

“We can protect our communities and at the same time protect our second amendment,” Joyce said. “To do nothing is simply not an option anymore.”

Brewer and Cosgrove, however, said that the gun bills were not tabled, but rather sent to the General Assembly’s Crime Commission. Cosgrove then called the special session a “knee-jerk” reaction to the shooting. Brewer added that the bills had been introduced at 10 a.m. and were to be considered at 2 p.m., which she said didn’t give enough time for public dissemination. Ryer then said he believed the governor had not been serious about enacting new laws, but rather, that he was interested only in being able to say in time for the election that the General Assembly was not discussing the matter.