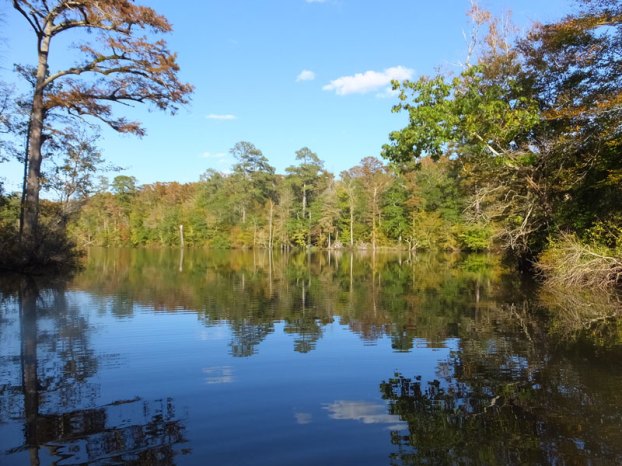 The RiverGuard shared this photos of the Nottoway River he took this past Friday. That's where he saw an eagle that started flying with Moonpie and him during the patrol. -- Submitted Jeff Turner

Spirit of Moonpie and I spent the 23rd through the 25th on the Nottoway below the Bronco Club. The water was 62 degrees, dingy, a little high and had a good flow to it. Air temps ranged from 43 to 70 degrees. I saw no water quality issues and I only picked up two pieces of trash and there were no derelict limb lines. You have no idea how nice that is for me not to have to spend three days picking up trash like I do on the Blackwater below Franklin, quite refreshing.

The fishing on this trip was fair. I caught a few bass to 2 pounds casting stick baits and small spinners and I also caught a couple of chain pickerel that I used for catfish bait. Jack stays on the hook better than bream … in most cases, but not this time. I set nine limb lines and struggled the entire two nights keeping bait on the lines.

The darn turtles were rampant this trip. I guess they are feeding up before they go to sleep for the winter or something. Anyway, I did manage to catch a total of 11 catfish to 6 pounds, a couple were even too small to clean. Oddly, most were channel cats, not blue, and I caught a brown bullhead and a yellow. That was good to see as the blues I thought had ’bout wiped out the yellow catfish population … well, at least there is still one. It was also very odd not to catch a blue over 15 pounds this time of year on the lines. I talked to a friend of mine that fished the week before me in the same area and they caught a bunch of big blues, one that weighed 32 pounds and had a 13-inch brown bullhead inside of it! Oh well, I guess I was a week too late. Hhaaahhaa!

Well, I had another cool eagle experience on this trip. I have told y’all before how in 1998 an eagle took me to the nest at Cherry Grove after looking for that nest for two years and not being able to find it. So, I was heading upriver on Friday to come home and popped around the curve before the last straight away going to Roundgut when a huge bald eagle jumped out of a tree and started flying with me. I mean it was like it was holding back so I could catch up. So, I floored the old Water Strider and pulled up right beside this eagle. I mean it even kept turning its head and looking at me as it was flying about 30 feet off of the water. It flew the entire mile of that straight away with Moonpie and I before banking off at the Roundgut curve. It was really cool. When the flight began, I reached for the camera to try to film it, but that is very dangerous to try that with a 46-year-old stick-steering boat flying up the river at full throttle … so I didn’t. 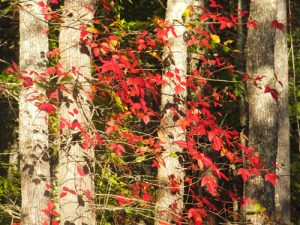 Pretty to look at, but don’t touch because it’s actually poison ivy. Remember the mnemonic: “leaves of three, let it be.” — Submitted Jeff Turner

You know I love showing y’all the things I get to see and experience when I’m on my river patrols, but in this case I think the river just wanted to thank me with a special gift that was just meant for me and Moonpie to enjoy on this day on two rivers we call the Nottoway and Blackwater.

The RiverGuard says that alligator weed can be seen at the power line below Franklin at the Pretlow Farm. —... read more