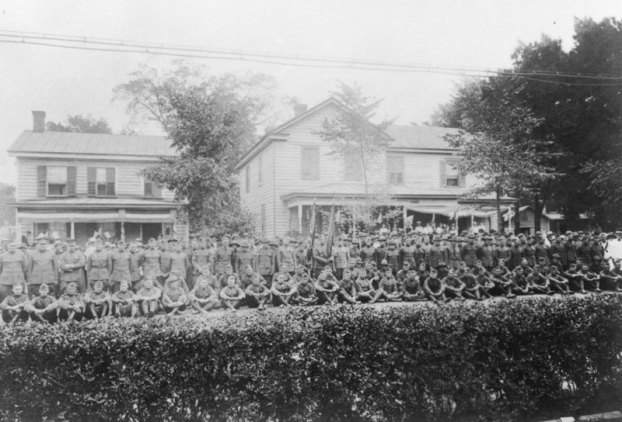 Men from the town of Franklin and other parts of Southampton County gather for a group photo. They had fought in one capacity or another during the War to End All Wars, later known as World War I. The soldiers and officers — both living and deceased — were lauded on June 25, 1919, in a grand parade in downtown Franklin. -- Submitted Clyde Parker 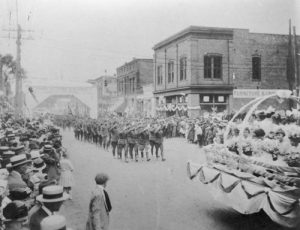 A parade took place in downtown Franklin on Tuesday, June 25, 1919, to honor returning local soldiers from fighting in what would become known as the War to End All Wars. Those men who did not survive the experience were also remembered. — Submitted Clyde Parker

As a fitting climax to Southampton’s participation in the world war and the valiant service rendered by 769 white and colored soldiers and sailors from our county, a home-coming celebration was held in Franklin on Wednesday. Although the war ended with the signing of the armistice on Nov. 11, 1918, our local celebration was delayed. Many Southampton County troops experienced delays in their separations from military service. So, after much indecision, June 25, 1919, was finally chosen as a time to honor our returning soldiers and sailors. As well, the celebration was in recognition of those who remained here, on the home-front, and waited bravely, praying for the return of those who fought on foreign soils.

Over 4,000 people furnished the tremendous gathering. They came from every district of Southampton County; neighboring Nansemond and Isle of Wight counties; and Hertford, Northampton and Gates counties in North Carolina.

The town was elaborately decorated with a profusion of flags and festoons of tri-colored bunting on practically every business house and residence. On Main Street and at the outskirts of town, there were “Welcome Home” mottos bearing the insignia of the “Blue Ridge” (80th) and of the “Blue and Gray” (29th) divisions.

We note at this point in our story that retired Major General Cecil C. Vaughan Jr., of Franklin, was at the forefront of most of the organizing activities pursuant to this great day of celebration. Many of us recall that he, as a Brigadier General, in 1918, assumed command of the 29th Infantry Division at Fort McClelland, Alabama; however, sadly, we are reminded of our sudden disappointment when, as the division was in the process of being deployed to France, General Vaughan, due to health reasons, was recalled to Washington for retirement.

The Franklin parade, led by Boy Scouts Paul Camp Jr. and William Holland and the Franklin Town Marching Band, was most creditable in its size and appointments. It started at 11 o’clock in the morning, from the head of Fourth Avenue, moving always through enthusiastic throngs of people on both sides of the principal streets of the town. A triumphal arch, illuminated at night with red, white and blue electric lights, was placed on Main Street between First and Second avenues.

A huge truck converted into a basket float, in which were seated 27 dainty little maidens, was next in line. Each little girl carried a basket full of flowers which they strewed in the street immediately in front of the soldiers.

Next came the honorees, the soldiers and sailors, 100 strong and in uniform, under the joint command of Captain Franklin Edwards, Lieutenant Cecil C. Vaughan III and Lieutenant Vaughan Camp.

The honor float, a beautifully designed conception, was next in line. It carried a huge white cross bearing a large gold star and a wreath of immortelles with the motto in gold “To Those Who Sleep.” On this float Misses Texie Camp, Tootsie Boon and Elizabeth Bonny, with trumpets and harp, symbolized the county’s grief for those who did not return to their native county and their loved ones.

Three motorcars, decorated with Confederate flags, carried Confederate veterans. Behind them were our Spanish-American War veterans.

Next, was an American Red Cross float upon which Mrs. Walter H. Norfleet, while holding a wounded soldier, charmingly symbolized “The Greatest Mother in the World.” Master Jordan Beale Powell Jr., in sailor costume, represented a sailor.

The final unit, a Salvation Army float, carried a bevy of young ladies of the county. Misses Helen Smith, Mary Lee Williams, Sadie Forbes, Antoinette Parker, Emily Eley, Lavita MacLean and Ursula Fowler, each carried a basket of doughnuts, which they threw to the people along the parade route.

The parade ended on Clay Street in front of Franklin High School. Formal exercises were then held on the school grounds. Following singing of “Star-Spangled Banner” and “America,” the Reverend Francis R. Lee of the Emmanuel Episcopal Church offered a gracious and appropriate prayer. Mayor Joe Bynum Gay, disabled due to an injury, sent a message of gratitude. Then, Paul D. Camp, County chairman, expressed his pleasure on return of the soldier boys. Honorable J.L. Barham, Commander of Urquhart-Gillette Camp Confederate Veterans, spoke on behalf of his comrades. And then, while standing at long tables stretched out in the schoolyard, everyone partook of a huge feast.

Other activities of the day included moving picture shows, from 1:00 o’clock to 10:30 o’clock, at the Fourth Avenue Franklin Theater. A baseball game took place at Riverside Park, just off Main Street, in Franklin. Courtland defeated Franklin by a score of 9 to 3. That night, a dance was held at the Fourth Avenue Armory Hall with music provided by “Simmons’ Syncopators” of Norfolk.

The homecoming day for the colored soldiers and sailors of Southampton County will be celebrated in Franklin on Saturday, July 19, 1919. There will be a parade of all returned soldiers and sailors, starting a 11:30 o’clock. Honorable Thomas Newsom of Newport News, Virginia, will deliver the address at 1:30 o’clock at Barrett’s Grove near Cool Spring Church.

The Hampton Institute Band will furnish music for the occasion. Luncheon will be served to the soldiers, sailors and their relatives. All soldiers and sailors of the county are especially requested to be present in the morning of the said day, wearing their uniforms. According to W.R. Thomas, Secretary of the Committee, further announcements of interest concerning the celebration will be made through The Tidewater News by Chairman W.B. Holland.