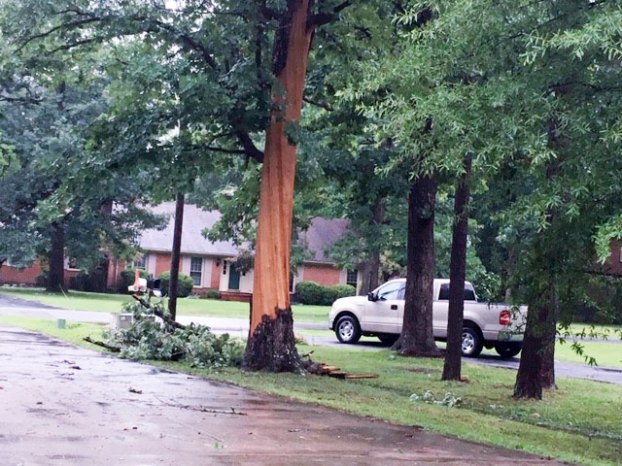 The lightning left this tree near the Haskins' driveway with major scarring and fallen branches. -- Kenya Smith Tidewater News 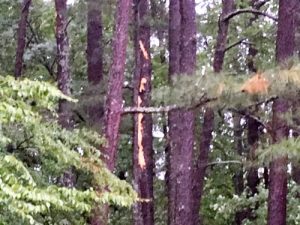 Last week, most of the Western Tidewater area had seen numerous periods of severe weather. For one household, the beginning of the week had been a shocking turn of events. Three trees were stuck by lightning at the home of the Haskins Family on Beechwood Drive. Thelma Haskins shared with The Tidewater News what she and her family experienced that Monday evening.

“I was in the living room, and everyone else was in the middle room,” she said. “We all heard this loud bang. My sister said that she and a few people in the house saw the flash and went outside and saw where the bark was coming off of the tree.”

According to stormhighway.com, the reason why lightning will sometimes strike trees is they are filled with moisture from water and sap. The moisture in the tree is a better conductor than air. Conductors are substances in which electrical charge carriers move easily from atom to atom with the application of voltage. For this reason, safety experts advise people to avoid standing under trees during a thunderstorm. When lightning strikes a tree, the tree can either be scarred, completely destroyed or suffer no damage.

For the Haskins, the only things that were damaged during the phenomenon were their air conditioner, and a few television sets.

“Right now, we have insurance, and they wanted prices on various things. We were also given various high deductibles. For most of the damages, we probably would have to pay out of pocket,” said Thelma.

Despite what happened on Monday evening, she’s not worried about the next steps.

“It’s all in God’s hands, so I’m not going to worry about what happened on Monday nor after the fact. We may have to pay out of pocket for the damages, but I do believe that God is in control. It doesn’t make sense to worry about things that we have no control over.”