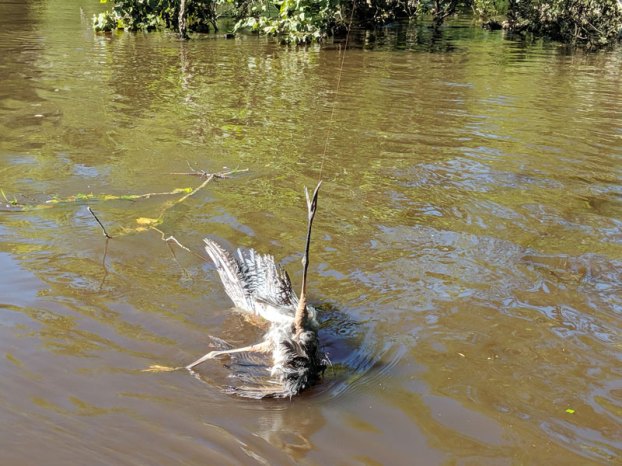 A Great Blue Heron was recently discovered dead after it got tangled up and drowned in someone's unattended casting line on the Nottoway River. -- Submitted Jeff Turner

Spirit of Moonpie and I spent the 21st through the 23rd on the Nottoway below Delaware. The water was high, fast, clear and 76 degrees. Air temps ranged from a refreshing 59 to 85 degrees. Excellent summer river weather except for the wind on the first day.

Trash in the water on this trip was practically nonexistent. However, the recent high water has floated a lot of logs and stumps out of that clear-cut swamp near Monroe Bridge. Some of that stuff is big and would not be good if you hit it at high speed in your boat.

The fishing on this trip was … bad. I thought with the recent high water the river would be refreshed and the fish would be all happy and ready to play, but that was not the case. I mean I did catch some nice bream on the flyrod, but that was about it. I tried a little bit for bass on topwater, but had not nary a hit for the 2 hours I tried. Of course, what I’m really after this time of year is giant blue cats. I might have had one cat hit on my monster float rig, but the rest were gar and that was on the first night. The second night I did not have a single hit and I was running the monster float rig AND a second rod with a conventional slip rig. Oh well, it was nice to be back on the river after a two-week break due to illness, monster cats or not.

As nice as it was to be back on the river, within minutes after leaving the ramp pier I came across a sight that truly boiled my blood. I get mad at a lot of things stupid people do to our rivers, but the needless torture and killing of wildlife really does it for me. Some non-casting Bozo the Clown numb nut cast a bottom rig 50 feet up in a tree, then left 55 feet of line hanging, which sadly entangled a Great Blue Heron. I tried shooting the line out of the tree, but was not successful. So, there is still 30 feet of line in that tree. The heron got tangled up on the lower end of the line by the legs, which then caused the majestic bird to drown a slow and tortuous death. By getting tangled by the legs 2 feet off the water, the heron’s head would be forced down whenever the bird stopped flapping to keep its head up. So, it was a terrible death. Evidently the way the bird was hanging also would not allow it to fly out of the water and perch somewhere either.

Why someone would leave all that red fishing line in a tree is beyond me. It’s senseless and it’s a crime. Unfortunately, it’s a crime that is nearly impossible to catch red-handed or investigate. I will say this though, 80 percent of people that fish, fish with someone else in the boat with them. So, it’s likely there are at least two people culpable in this crime that are total scumbags. Even if Bozo doesn’t know any better and you are in the boat with Bozo, if you don’t facilitate the removal of that line, you’re also a Bozo.

In closing this sad report I will say this: Don’t leave your damn fishing line hanging in the trees, and if you can’t cast any better than that, stick to fishing treeless lakes. AND last but not least, if you’re a Bozo, don’t fish in the two rivers we call the Nottoway and Blackwater.

By Kristi Hendricks Pay tribute to our winged and crawling pollinators as we celebrate National Pollinator Week. Twelve years ago... read more