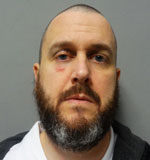 A jury trial for Wesley Paul Hadsell – the Norfolk man accused of murdering his adopted stepdaughter and concealing her body in Southampton County – has been set for Feb. 24, 2020 at 9:30 a.m., according to the Virginia Courts Case Information website.

The trial had originally been scheduled for Tuesday, May 21, but according to court records, the case had been continued to Thursday, June 20. The postponement, according to a court order by Circuit Court Judge L. Wayne Farmer, was due to Hadsell securing new representation on May 9 after his court-appointed attorney, Paul A. Fritzinger of the public defender’s office in Franklin, withdrew from the case.

A copy of Fritzinger’s motion to withdraw, which Southampton County Clerk of Circuit Court Rick Francis provided to The Tidewater News, cites a conflict between Hadsell and another client Fritzinger currently represents as the reason for the attorney’s withdrawing. The motion states that “counsel asserts that he has contacted ethics counsel at the Virginia State Bar and, after consultation, has been advised that further representation of Mr. Hadsell in these matters would not be proper. Because it is unethical for counsel to represent two clients whose interests are in direct conflict with one another, and because such a conflict has arisen the instant cases, counsel respectfully submits this Motion to Withdraw and requests that the Court appoint new counsel on this matter.”

Court records indicate that Judge Farmer granted Fritzinger leave to withdraw, and, citing that Hadsell was at that point without a lawyer and indigent as shown in his affidavit filed with the court, appointed Jimmy Ellenson of Ellenson Law Office P.C. to take Fritzinger’s place as Hadsell’s lawyer.

Francis confirmed that Thursday, June 20 had been Ellenson’s first appearance in court with Hadsell, during which he and the Southampton County’s Commonwealth’s Attorney’s Office agreed on the new trial date. Ellenson, Francis said, is not with the public defender’s office but rather has an office in the Franklin Business Center.

As previously reported, Hadsell is charged with first degree murder; murder: non-capital felony; and the concealment of a dead body – in this case, that of Angelica “A.J.” Hadsell, who, in 2015, was a freshman at Longwood University in Farmville. She had been on spring break at the time of her disappearance on March 3 of that year. The search took Norfolk police investigators and a dive team to a pond off Walters Highway (U.S. Route 258) in southern Isle of Wight County and Joyners Bridge Road on April 4, 2015.

Within that week, Norfolk Police came to Southampton County and told the county Sheriff’s Office of body found outside a house in the 34000 block of Smiths Ferry Road (also U.S. Route 258). The body was taken to the medical examiner’s office in Norfolk, where it was positively identified as that of A.J.

Hadsell has pleaded not guilty to all charges.

Four others have opponent on ballot COURTLAND   At a minimum, Southampton County’s Board of Supervisors will have two new... read more