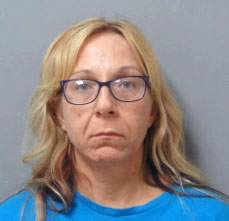 On Tuesday evening in Southampton County Circuit Court, Judge William R. Savage (ret.) found Jennifer M. Bumgardner, the former town clerk of Ivor, guilty on all charges related to her having embezzled money from the municipality during her time as clerk and treasurer.

According to Southampton County Clerk of Circuit Court Rick Francis, Bumgardner was convicted of a total of 10 felony counts of embezzlement. The Virginia Courts Case Information website, courts.state.va.us, lists nine of these as being for embezzling $500 or more, and one for embezzling $200 or more.

Bumgardner had been arrested in August 2018 initially on three felony warrants, each for embezzling $200 or more from the town, according to the arrest report provided to The Tidewater News at the time by Lt. Camden Cobb, a detective and spokesman for the Southampton County Sheriff’s Office. The newspaper reported later that month that Cobb, in an affidavit for a search warrant against the former town clerk, stated the Sheriff’s Office had found over $22,000 to have been embezzled in checks signed and authorized by, written to and endorsed by Bumgardner.

Around this same time, the town conducted its own audit, separate from the Sheriff’s Office’s investigation. As reported in the paper’s Jan. 28, 2019 edition, the audit report, which was completed by the accounting firm Britt & Peak, concluded that approximately $84,000 had disappeared from Ivor’s books from July 2013 through August 2018 while Bumgardner was serving as clerk and treasurer.

“The judge listened very attentively to nearly six hours of complex evidence and attorney arguments. While we’re dissappointed in the result, we respect his final decision,” said Bassel Khalaf, one of Bumgardner’s attorneys. Khalaf, along with Taite Westendorf, both of the Virginia Beach criminal defense law firm Westendorf & Khalaf PLLC, had both represented Bumgardner during her trial.

“The next step in the process is Mrs. Bumgardner’s sentencing hearing, scheduled for Sept. 24,” Khalaf said. “She has no prior criminal history and has tremendous support in the local community. We look forward to fighting on her behalf every step of the way.”

Ivor Mayor Tara Kea, who attended the trial on Tuesday, told the paper on Wednesday afternoon that she also was uncertain what the provable total dollar amount had been. She did recall that the figure had been over $50,000, but less than the figure the town’s auditor had calculated.

“It was going to be hard to prove a lot of it, just because of her [Bumgardner’s] record keeping, or lack thereof,” Kea said.

However, when asked about the verdict, Kea said, “The town and I are very pleased. It looks like justice will be served.”

The mayor explained that a lot of Ivor’s residents pay their town water bills in cash, and that little to none of that cash had actually been getting deposited in the town’s bank account. She added that the day Bumgardner was arrested, the town did not have enough money in its general account to pay its bills that were due at the time. The town managed to avoid defaulting on its bills, Kea said, when it received a payment she had not known was coming in.

“Then, we started actually depositing the cash that was coming in and stopped writing her [Bumgardner] extra paychecks,” she added. “It quickly started to turn around.”

Since instituting new financial checks and balances – which Kea said included hiring a new clerk/treasurer, requiring the mayor and vice mayor to both sign each check before any payments are made and having the mayor and vice mayor double check the clerk’s reports and bank reconciliations before they are presented to the rest of the Town Council – the town has managed, as of the end of May, to deposit nearly $21,000 in cash alone over the past nine months since Bumgardner’s arrest. The mayor added that the town is also in the process of upgrading its financial software system, which will include built-in controls to help prevent what Bumgardner did from happening again.

Bumgardner’s Sept. 24 pre-sentence report has been scheduled for 9:30 a.m. Asked what sentence Bumgardner might face, Francis again deferred to the trial attorneys, but stated that under Virginia Code 18.2-111, embezzlement may be treated as larceny and punished accordingly. According to Virginia Code 18.2-95, the threshold today for larceny to be considered grand larceny is $500 or more, but according to Francis, was $200 at the time of Bumgardner’s offenses. Grand larceny, according to the code, is punishable by imprisonment in a state correctional facility for not less than one nor more than 20 years, or, in the discretion of a jury or court, be confined in jail for a period not exceeding 12 months or fined not more than $2,500, either or both.