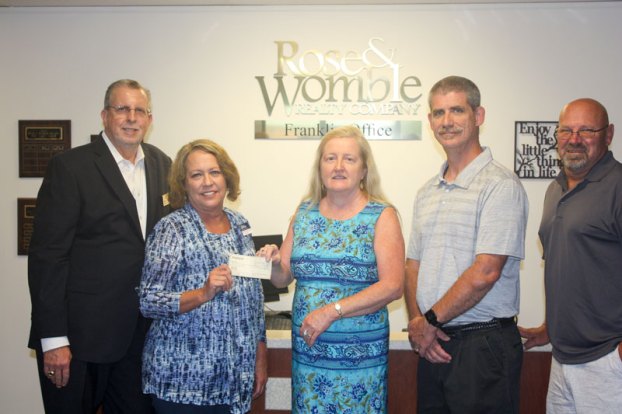 Sedley Baptist Church’s Local Ministry, on Tuesday, presented the Rose & Womble Foundation with a check for $500, intended for the families of those lost in the Virginia Beach shooting on May 31. The foundation will match another $500, making it a $1,000 donation. Pictured from left are Rose & Womble Foundation President Jimmy Gillerlain, Mary Vick, Cynthia Edwards, Sedley Baptist Church Pastor Jim Foreman and Gary Hewett. Kenya Smith | Tidewater News

The late television personality Fred Rogers once said, “We live in a world in which we need to share responsibility. It’s easy to say ‘It’s not my child, not my community, not my world, not my problem.’ Then there are those who see the need and respond. I considered those people my heroes.”

As the city of Virginia Beach is still coping with the tragic shooting that took place on May 31, two communities decided to respond to the needs of the victims and their families. The Sedley Baptist Church Local Ministry decided to team up with the Rose & Womble Foundation by donating $500. In turn, the foundation will match the $500, making it a $1,000 donation to the families who lost their loved ones during the shooting.

While Virginia Beach is just over an hour away from Franklin and Southampton County, it has affected both the ministry and foundation

“I did know a couple of the of the victims who were involved in the shooting,” said Jimmy Gillerlain, the president of the Rose & Womble Foundation, “Plus, Virginia Beach is part of the Hampton Roads community. If a tragedy affects one part of the area, affects us all.”

For Pastor Jim Forman of Sedley Baptist Church, the shooting has made him aware about how finite and precious life can be.

“Anytime a tragedy hits, it makes you think about the value of life,” he said, “These situations can teach us that we should make the most out of the time that we have on this earth.”

Many people believe they shouldn’t be concerned or share the responsibility of helping those in need because tragedies don’t happen in their community. Nevertheless, Gillerlain and Forman decided to go beyond that belief.

“We are used to seeing tragedies on television. The community where the shooting took place is just an hour and a half away from Franklin. However, a similar tragedy can happen in this community just as it has happened in other communities,” Gillerlain said.

“Jesus teaches us to do good to all men,” said Foreman, “We’ve had moments where we have helped people from different places who were going through hard times. A few years ago, our church held a benefit to help the victims of the earthquake and tsunami that impacted Japan.”

Gillerlain also mentioned that the Rose & Womble Foundation has also helped people in other communities.
“In the last two years, we have helped over 69 organizations with donations, and we even provided Thanksgiving dinner baskets to 3,031 families, which is 18,000 people in total.” he said.

If anyone would like to make a donation to the Rose & Womble Foundation for the Virginia Beach shooting victims and their families, they may visit roseandwomblefoundation.org and select “Gift for VB Shooting Victims” in the drop-down menu. Donations amounts can be customized through PayPal, by clicking on the suggested amount and editing as needed. If anyone would like make a donation via check, write the check to the Rose & Womble Foundation and note “VB Shooting” in the memo line. Checks can be mailed to: Rose & Womble Foundation, 4190 S. Plaza Trail, Suite 200, Virginia Beach, VA 23452. The foundation will match all funds raised during June dollar for dollar.

WINDSOR Isle of Wight County’s Windsor District Board of Supervisors and School Board representatives are both up for re-election this... read more