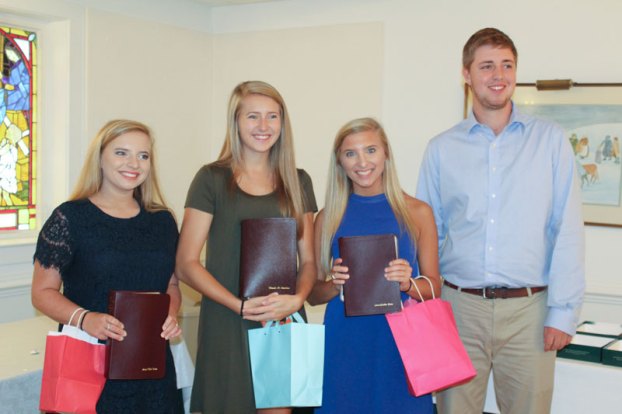 From left are Jacey C. Bunn, Hannah Bradshaw, Jamey B. Bunn and Brendan Simms. Members of Newsoms United Methodist Church, they all were lauded for their academic achievements this past school year. The girls graduated from Southampton High School, and will go to James Madison University in the fall; Simms has completed his undergraduate work at that school. Stephen H. Cowles | Tidewater News 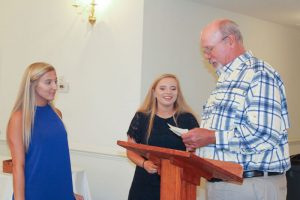 Four young members of Newsoms United Methodist Church were recently feted with a breakfast before morning Sunday school and worship. Three of them, all young ladies were then soon to graduate from Southampton High School. The fourth person, Brendan Simms, finished his undergraduate work at James Madison University, which is where the Hannah Bradshaw, Jacey Blake Bunn and twin sister Jamey Caroline Bunn will attend this fall.

Each of the females was presented a Bible inscribed with her own name on it. This was done by fellow member Tommy Butler, who reviewed their scholastic achievements; Cherie Pope, choir director, shared reminiscences about all four growing up in the church.

Prince Carter then presented $1,000 scholarships to the Bunn sisters.

The daughter of Heath and Deborah Bradshaw, Hannah will study nursing at JMU this fall. In addition to graduating from SHS, she also earned an associate degree in general studies from Paul D. Camp Community College this past May.

A daughter of John D. and Dana Bunn, Jacey was a member of the Christian Club, Beta Club, National Honor Society and the National Technical Society. In addition to being parliamentarian of the student body SGA, she was on the homecoming court.

Jacey also played volleyball all four years at the school, in which she was named by teammates co-Most Valuable Player.

Ranked fifth in her graduating class, Jacey will further her education at JMU by majoring in psychology.

She would like to thank Newsoms UMC for all of the love and support that has been shared with her and her family since she was born.

Jamey, also a daughter of John D. and Dana Bunn, has been an involved student throughout her high school career, where she has been a member of the SGA, Christian Club, Beta Club and National Honor Society. She was captain of her volleyball team and also named co-MVP.

Jamey will also attend JMU this fall, majoring in health sciences with a focus in pre-physical therapy.

She would also like to thank the church members for everything that they put together that day and for their unending support.