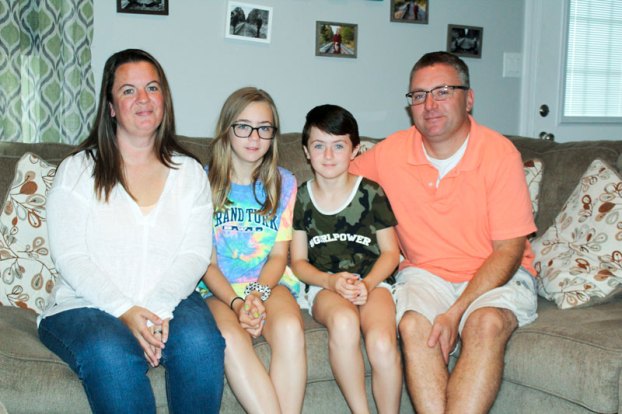 Julie, Abigail, Jamee and Andrew Eger have made significant adjustments in their lives since Abbie developed Type 1 diabetes. But through education, changes in diet and a commitment to stay on top of T1D, they thrive as a family. Stephen H. Cowles | Tidewater News 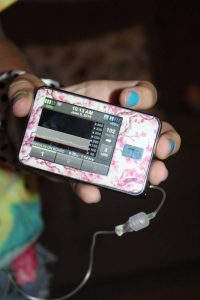 Abigail Eger — Abbie — is very much like any other 11-year-old girl. She has a family, pets, school and friends, the usual. Oh, but what makes her different is she also has Type 1 diabetes. That disease exists when the pancreas significantly slows down or even stops making insulin. The latter is a hormone required for sugar, the glucose kind, to get into the body’s cells to make energy that keeps a body going.

Very much like other families with a child who suddenly develops T1D, the Egers — which also includes dad Andrew, mom Julie and sister Jamee — have had to learn a lot in a short amount of time.

During a recent interview, Julie recalled the start of what would eventually become their proverbial new normal, which was Feb. 21, 2017, to be exact.

The girls came home from school and were doing their homework while their mother made dinner. Abbie then asked for some Tylenol because her stomach had started to hurt. Later, she was still in discomfort and not at all hungry. Asked where Abbie hurt, she pointed to the lower right of her abdomen. Touching the area made the girl jump, and thinking it was the appendix, took her to the emergency room at Southampton Memorial Hospital. as a precaution. The waiting room was crowded and full of people with the flu. To prevent any future complications, Andrew took his oldest to Sentara Obici Hospital in Suffolk, which was able to be treated quicker.

He called a few hours later and, as Julie tells in her blog www.oursweetlife.net, “The first words out of Andy’s mouth were, “Don’t freak out.” I just knew it was her appendix and she was going to have surgery. He then went on to tell me that they too had thought it was her appendix, but they ran the blood work and her blood sugar had come back at 480. It was then he said she was being transferred to CHKD as emergency status and that she was possibly Type 1 Diabetic.”

After something of an ordeal in testing, the confirmation came later. The parents wondered if there was a family history of the disease, but only Julie’s father had become a Type 2 diabetic; there was no other known connection to T1D. Jamee was tested and found to have the positive antibodies, but as Andrew said, “So far, so good.”

He also pointed out how Julie has become something of an expert on the condition.

Abbie remembered those early days as a time when “there were lots of shots,” and getting an education in using needles to inject insulin.

Back home, she was taking five units of Levemir, an insulin that can keep her blood sugar stable for about 12 to 18 hours. Within two months, Abbie needed just one unit of the Levemir, then to a half-unit and finally near the end of April, was off the medicine.

This began the “honeymoon phase,” that’s apparently well-known among people with T1D which Julie also describes as deceptive. Soon after the condition sets in, there’s a temporary recovery — times will vary — when the pancreas is still manufacturing insulin. Not only was the girl able to stay off insulin for a little more than a year, they could carry on with activities and even memorable vacations.

“We believe it lasted so long because of a change of diet,” said Andrew. “We took her off bread, rice, pasta, fast food, and that made that time last longer.”

“We only had to check her blood sugar around four times a day and that was it,” said Julie.

The parents acknowledged that was a time of denial — the understandable hope, belief really, that the worst was over.

Last year around this time, Abbie’s sugar levels began creeping and climbing upward. After it measured especially high, an urgent call to a doctor gave Julie what she called a “crash course” in what to do next. More extensive training came a few weeks later.

The discovery of Insulin Calculate for iPhones has proved successful.

“All we had to do was put in the Target Number, the Correction Factor, and the Carb Ratio (which we could change as needed),” Julie wrote in her blog. “Then at meal time input the amount of carbs she was having and bam! It would tell us how many units of insulin she needed.”

Family meals have changed, all of the better, as they’ve learned to prepare food that’s healthier not only for Abbie, but also the rest of the Egers. They also exercise more, and Andrew is pleased how that’s enabled him to noticeably reducing his weight.

Testing became much more frequent, and so did the injections. Another adjustment for Abbie is the option of an insulin pump, which later became a part of her. Ultimately, she got continuous glucose monitor Dexcom G5. In a matter-of-fact way, she lifts up her shirt enough to show the pump attached on her abdomen. All this is tied in with phone applications that monitors and displays blood sugar levels to Abbie, Julie and Andrew.

“It [the Dexcom] is the most phenomenal thing,” said Julie.

Getting the word out

Speaking of which, it was Dexcom who made it possible for Abbie to share her experience with a wide range of people.

Many people who follow contemporary country music are likely familiar with Eric Paslay, but they might not be aware that he also has T1D. Recently, the singer/songwriter developed a podcast called “Level with Me.” After a meeting with Dexcom representatives this past March, Abbie was invited to participate in that medium. Along with her mother, they went to Nashville, Tennessee, and met Paslay, who Julie describes as “gracious and “so down to earth.” Abbie was also impressed by the event, and she and the singer even took a picture showing off their pumps.

“It was very eye-opening and a great experience to just be able to speak with someone who has T1D themselves, but also can understand from an adult perspective how this effects every aspect of your life,” mom added.

This link will enable you to hear that via iTunes or wherever else podcasts are streamed.

As referenced at top, Julie is writing a blog where you can follow the Eger’s progression and comment.

Abbie’s T1D is for life, but through her family and other support systems, it’s become a condition and not a debilitating illness. Andrew wants other families dealing with T1D to know that while the experiences can be at times overwhelming, the adjustments in life can be made. “It can be done. We’re getting through it.”

He asked people who see Abbie or other people with pumps to not gawk or stare, but know that’s part of their lives. Abbie is very approachable and willing to talk about her experience to those who ask.

Now, said Andrew, “She can swim, hike, climb mountains, play with her friends … just like any other kid.”

A conversation made concrete

Andrew Murrell, a graduate of the college’s training, demonstrates the use of a forklift in the warehouse. — Stephen... read more