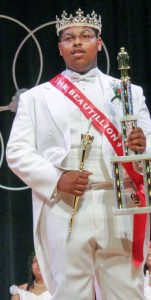 On June 1, the Franklin-Southampton chapter of the Kappa Alpha Psi Fraternity Inc. held its bi-annual Beautillion event. The event was held in partnership with the Lambda Psi Omega Chapter of Alpha Kappa Alpha Sorority Inc.

Trevor Blow, now a graduated senior at Southampton High School, was named the winner in the event. Runners-up were junior Jaylen Woodley and sophomore Paul Wyche, also both of SHS.

The program is intended to build character, prepare the young men for both college and entrance into adult life. Over a period of approximately nine months, the young men were introduced to varied topics and were provided assignments for completion. Programs and presentations which were introduced include:

Fundraising and activity completion are major elements of the program. The young men were asked to demonstrate their economic prowess and capabilities by putting on activities and soliciting their circles of influence in order to raise funds for their initiatives. Part of the funds which they collected will be provided to the young men for their educational careers.

This program has been going on for many years in the Kappa Alpha Psi Fraternity. The former winner, Darius Neclos — a recent Norfolk State University graduate — crowned Trevor Blow.

For more information about the fraternity, contact Jerrell King or Robbie Hill at 556-9278.