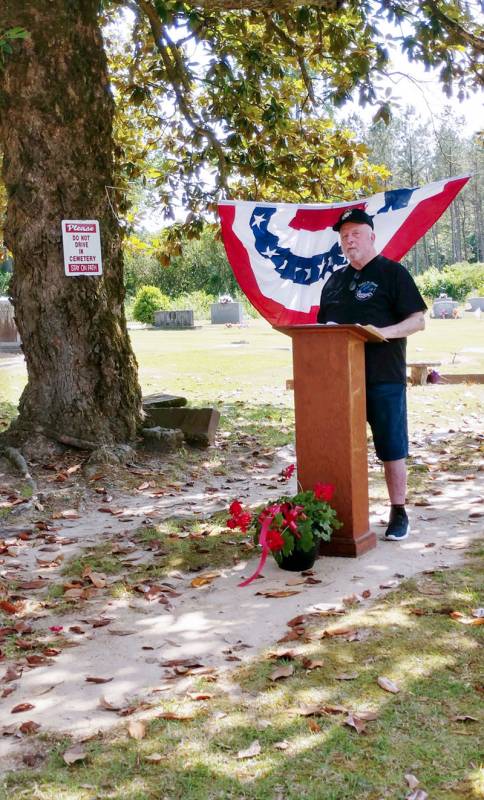 In the small, quaint village of Drewryville, Memorial Day was commemorated under the large blooming magnolia trees. The patrons brought their chairs and gathered in the Drewryville Cemetery to remember those who gave their lives for our country and for those that served in the military. Many were dressed in the stars and stripes and red, white, and blue, the patriotic colors for our country.

Jennifer Johnson rang the bell from Thomas Memorial Baptist Church for “The National Moment of Remembrance” at 3 p.m. Shirley Burgess welcomed those attending. Andrew Hinson, a Boy Scout from Hunterdale Troop 125 presented the colors. He then led the group in saying the Pledge of Allegiance to the American flag, each person saluting with their hand over their heart to show their love for the USA. Michael Edwards led the group in singing the “Star Spangled Banner.”

Shirley then introduced David Turner, a veteran that served in the Marines to speak. David spoke on America being a free country and the many reasons we should thank veterans. He shared stories about some of the wars including the many soldiers that were killed in combat. Ninety-three thousand American soldiers rest in 14 cemeteries abroad and 78,900 are still missing. Many are buried in the Philippines, Tunisia, Italy, France, England, Belgium and Luxemburg.

He read a poem titled “In Flanders Fields.” It describes the cemetery in Belgium where the poppies grow, the crosses are row by row, and many soldiers are laid to rest there that did not make it home to their loved ones. We were also reminded that women that served were also buried there and in our local cemetery. He shared that when he wears his badges many times he is thanked for his service. When you see a veteran take that moment and thank them for your freedom and the right to live in the USA.

Shirley then introduced Skip Blackburn, another Marine veteran from the community to read the names of those buried in this cemetery and the branch of service they served. A flag had been placed at each grave to remind us of their dedication. Skip also shared stories of some of these people as they were remembered.

The service closed with Michael singing “God Bless the USA” by Lee Greenwood. Andrew then retired the colors. The service was sponsored by the GFWC Drewryville Woman’s Club.

By Charles Qualls This past Sunday was Pentecost. Acts 2:1-21 was the Scripture text that was central for us, as... read more