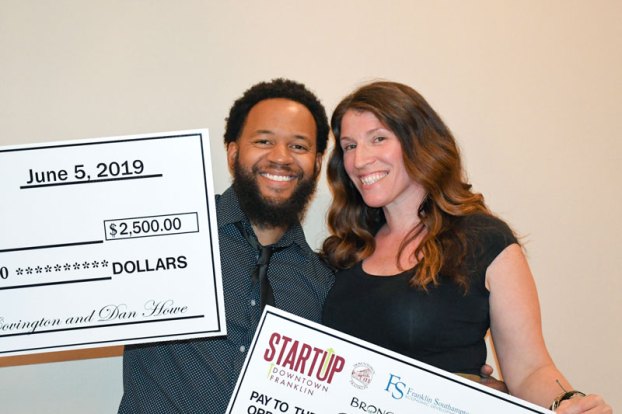 Kasey and Delia Square of Storehouse Coffee hold up the big checks they received from the STARTUP campaign on Wednesday evening. In addition to the $20,000 grand prize, the couple also was awarded $2,500 to be use for marketing and advertising. Mitzi Lusk | Tidewater News

A coffee shop, art studio and gymnasium are the recipients of the third annual STARTUP campaign, which concluded with the awarding of money on Wednesday evening at the Main Event in downtown Franklin.

Kasey and Delia Square’s Storehouse got an appropriately caffeine-fueled injection of cash — $20,000, to be precise — when they were announced the recipients of the largest prize. There was much excitement voiced by many other people in the room when Storehouse was named.

The Squares, who have been fixing up their place on Second Avenue, said afterward that they are putting the finishing touches of their shop, and expect to open mid-summer. 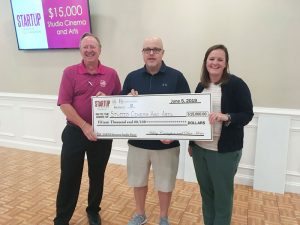 Michael Parker holds up the $15,000 he can use for his business, Studio Cinema and Arts. With him are DFA Director Dan Howe and Ashley Covington of FSEDI. He also got $1,500 more for marketing and advertising purposes. Stephen H. Cowles | Tidewater News

Parker said later that work is being done in phases, and the first to be developed will be the food service, which is to feature a bistro/pub, rooftop bar and Palate Creamery, which would serve ice cream. The art studio and cinema will be developed later.

Retro Flex Gym LLC, developed by Hunter and Christii Darden, is strengthened by $10,000. The 24-hour gym, which will be in Courtland, is to feature weights and machinery used for toning or basic strength-training in other facilities. 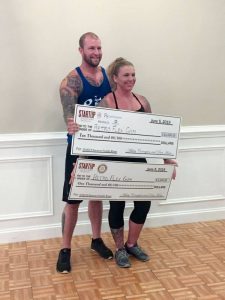 Hunter and Christii Darden received the third-place prize of $10,000 to establish Retro Flex Gym in Courtland. They also got an extra $1,000 for advertising and marketing purposes. Stephen H. Cowles | Tidewater News

The Dardens were evidently happy about the prize, and later said they anticipate opening their place by October.

The money that received is to be used by year’s end for establishing the business through purchase of equipment, inventory, site renovations or even rent.

Further, each got an additional amount of cash, $2,500; $1,500 and $1,000 respectively, for marketing and advertising purposes. That money came courtesy of the Franklin Rotary Club. Galen Butler told the audience that in reviewing its list of how the group can help the community it serves, “growing local economies” was included.

Howe, Covington, Southampton County supervisor Randolph Cook and Franklin councilman Bobby Cutchins all congratulated both the prize recipients and all other contestants. They also stressed that “everyone was a winner” just for working so far in getting their own businesses to this point.