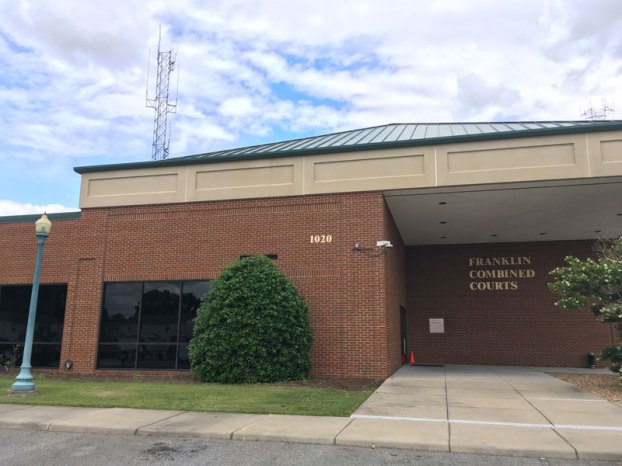 The Franklin Combined Courts building on Pretlow Street houses the city’s General District Court and Juvenile & Domestic Relations Court, as well as the clerks for those courts.

City knew of court concerns since 2016

Emails that The Tidewater News obtained from the City of Franklin via a Freedom of Information Act request on May 24 indicate that the city — or at least its former city manager, Randy Martin — knew of security deficiencies in the city’s combined courts building on Pretlow Street since early 2016, yet took no action to obtain any written renovation estimates from architectural firms.

In an email dated Feb. 24, 2016, now-retired Juvenile & Domestic Relations Court Judge Robert Brewbaker writes to Martin, “You and I have talked a couple of times about the problems with the Franklin courthouse — specifically, the incurable security problems. You will recall that we had a security assessment done, including consultation with engineers about how the building could be re-configured (at enormous expense) to provide for security. Conclusion: it cannot be fixed at any price.”

The judge continues, “I am very encouraged to hear about the increasing communication and cooperation between the county and city on ways to share in services and facilities … The logical solution, of course, is that we would have one modern, secure courthouse to serve the county and the city and eliminate the expense of building and maintaining two buildings.”

Then, on Aug. 10, 2016, Brewbaker forwards an email to Martin, and copies Mayor Frank Rabil, which he sent to Southampton County Sheriff Jack Stutts the same day. Brewbaker’s email to Stutts states, “The security issues that interfere with my sleep every night is the situation in the Franklin Combined District Courts … I am told that when the Franklin Courts’ building was designed and constructed neither the State Police, the Sheriff’s Department, nor the Franklin Police Department was consulted regarding provisions for security. It shows. I recall that about three years ago Capt. [Josh] Wyche [of the Southampton County Sheriff’s Office] kindly came to the Franklin Court’s building and gave it a thorough inspection. I also recall that someone (and I thought it was Capt. Wyche until I recently asked him about it and he did not recall having done so) had either a contractor or an architect in the building to propose ways the interior of the building could be re-configured to provide protection and security to both the clerks and the Court Service Unit staff. My recollection is that that person concluded that it could not be done without completely gutting the building, including the courtroom, and starting all over — all at a prohibitive price.”

Stutts, asked about the email from Brewbaker, told the newspaper on Thursday that he recalled the communication with the judge, and explained that the layout of the Franklin Courts building “isn’t exactly what you would want if you were designing it with security in mind.”

As for the walkthrough by an architect or engineer, the sheriff said he learned of this from his predecessor, Sheriff Vernie Francis. Stutts added that it was his understanding that this architect or engineer had concluded that a redesign would be difficult because of the supporting walls in the building.

“There’s some walls you can’t do away with,” Stutts said.

However, when The Tidewater News attempted on May 29 to request a copy of this architect’s or contractor’s assessment — again via FOIA — City Attorney H. Taylor Williams IV wrote back on May 30, “I have not found any copy or record of a security assessment report supposedly prepared on the Franklin General District and Juvenile and Domestic Relations Court building located on Pretlow Street in Franklin.”

Wyche, when asked about his alleged role in evaluating the Franklin Courts building, said via email on May 29, “To my knowledge, I did not do an evaluation of the City of Franklin Court building.”

Martin, speaking to the newspaper on Thursday, recalled having discussions with Brewbaker about the Franklin Courts building during the time he and Rabil served as the city’s representatives on Southampton County’s Courthouse Committee — which the county’s Board of Supervisors had formed in early 2016 for the purpose of advising the Board on whether to renovate the existing Southampton County Courthouse or build new. He recalled hearing from Brewbaker of some type of analysis of the Franklin Courts building being done prior to his tenure as city manager, but confirmed that he had never received any kind of written report of said analysis.

Martin then stated that he had conducted his own evaluation of what it might cost to renovate the Franklin Courts building, and had come up with a “ballpark figure,” but had concluded at the time that it would be more cost effective for the city to move its courts to Southampton rather than attempt to renovate the Pretlow Street building. He did not recall what specific dollar amount he had estimated for the cost of a renovation.

“It was pretty obvious the kind of numbers [dollar amount] it was going to take would likely exceed the added cost of including our court function in their facility,” said Martin, who since retiring from Franklin is now serving as the interim town manager of Emerald Isle, North Carolina. “It also have us flexibility in other ways … the police department was pretty much maxed out in their space [adjoining the courts building].”

When asked if the concerns Brewbaker had shared with Rabil and him had ever been brought to the attention to the rest of the City Council, Martin said he believed that the Franklin Courts building was discussed during at least one of the presentations that Southampton County Administrator Mike Johnson made to the Council on the Southampton County Courthouse project, but confirmed that no formal study of the building had been pursued at the time.

Vice Mayor Barry Cheatham said on Thursday that he recalled hearing of concerns about the city’s courts building from Martin during a Council meeting, but said he had not seen anything that verified what those concerns might be beyond what Martin had mentioned.

Councilman Benny Burgess also remembered Martin mentioning security concerns at the courts building, and likewise confirmed, “I never saw any paperwork from Randy on that. He mentioned a couple [dollar amounts] but nothing we had an architect or consultant give us.”

The councilman added that he didn’t recall what the numbers were or where Martin obtained them, or if the numbers had been generated internally.

Burgess also said that while the Council had had several discussions about what he termed the “bigger picture,” — this being how Franklin’s courts would fit into a new or renovated Southampton County Courthouse — he added there was “very little talk” of any sort of proposed renovation of the Pretlow Street building. Asked if the Council had ever formally voted to move its courts to Courtland, Burgess said, “I don’t remember voting, but we might have.” However, Cheatham said to his knowledge, the Council had never confirmed a decision to stay or move.

“It would be crazy to do anything until we get all the facts together,” the vice mayor said. “Last I heard, she [City Manager Amanda Jarratt] was talking to a couple firms for an estimate of what it would cost to fix [the Pretlow Street building.]”

Whether the Council’s 5-2 vote on May 13 to pass a resolution stating the city wished to keep its courts at their current location remains the city’s final decision, he said, will be contingent on the information the Council receives on the cost of its courts staying or leaving.

According to the agenda for Monday’s Franklin City Council meeting, Jarratt plans to recommend that the Council authorize her to issue a request for proposals for architectural services. This would be for an analysis of the courts facility. She may also recommend the city form its own Courthouse Committee composed of stakeholders to review the architect’s work and make recommendations to the City Council on whether to move or renovate.

FRANKLIN Franklin’s City Council is again scheduled to seek nominations for a Ward 5 city School Board representative on... read more