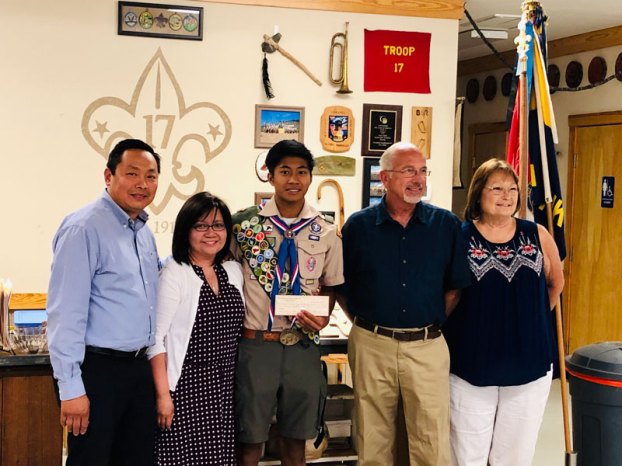 Anthony Ona, center, with Alex and Maria Ona, parents on right, and Jimmy and Theresa Henderson, left. The Scout has received the Eric V Henderson Memorial Scholarship for this year. -- Submitted Tom Jones

Eric Henderson was an Eagle Scout with the now-disbanded Troop 28 of Franklin. He continued with his love of scouting through his mentorship with Campus Scouts while attending Virginia Tech. He passed away in January of 2014. It was this love of scouting that prompted the family to start the Eric V. Henderson Memorial Scholarship that fall by offering a $1,000 award to a local Boy Scout.

The recipient of the scholarship must be in good standing of the troop with acceptance into a full-time college and hold a minimum GPA of 3.0. He must demonstrate leadership, character and heart for family, friends and community by exemplifying the Scout oath and law in his daily life, as well as to assist others and conduct himself in such a way that warrants similar recognition.

Anthony Ona is the son of Alex and Maria Ona of Courtland, and is an Eagle Scout with Troop 17, chartered by the High Street United Methodist Church. He will graduate from Southampton High School with a current 4.17 GPA, and will attend Virginia Military Institute for the fall term with a major in biology.

Ona is a member of the National Beta Club, National Honor Society and has been a member of the National Key Club. He has countless hours volunteering for: the James L. Camp YMCA Leaders Club, from which he will earn his six-year jacket at the Blue Ridge Leaders School this month; St. Jude Knights of Columbus, where he is an active member of St. Jude Catholic parish; Coalition Against Poverty Suffolk; and Relay For Life.

He serves as an assistant scoutmaster in his Boy Scout troop and earned the rank of Eagle Scout while mentoring younger scouts on the technical skills needed in order to advance through the program.

Another assistant scoutmaster stated, “Mr. Ona has all of the attributes of a successful future leader in the community. He has exhibited leadership, academic excellence, and perseverance. Anthony leads by example.”