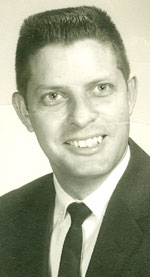 A native of Greensville County, he was a son of the late Ollie Fielding Tuck and Eva Pittard Tuck. Mr. Tuck was also preceded in death by his wife of 47 years, Marie R. Tuck; and siblings, Linda Bradley, Jerry Mulligan, Ann Holt, Herbert, Ala, Austin, Carrell and Eugene Tuck.

He graduated from Greensville County High School and became a communications consultant for Continental Telephone Company, where he worked for 30 years.

After retiring, he formed and operated Tuck Communications for 12 years before selling to T.C.I. in Norfolk, Virginia.

Survivors include one daughter, Mary Dorsey Tuck of Richmond, Virginia; one son, Edward O. Tuck Jr. and his wife, Sherry, of Sedley, Virginia; three grandchildren, Kimberly Wallmeyer (Jordan) of Walters, Amanda Bulls (Chris) of Courtland and Meagan Tuck of Sedley; one sister, Evelyn Atkins of Richmond; one brother, Thomas Tuck of Franklin; three great-grandchildren, Rowan and Theron Wallmeyer and Tuck Bulls; and many nieces and nephews.

The funeral with Masonic rites will be at 10 a.m. on Saturday, June 8, in Wright Funeral Home with the Rev. James H. Hyatt Jr. and the Rev. Dr. Charles Qualls officiating. Burial with military honors will follow in Rosemont Cemetery, Sedley.

The family will receive friends from 7 to 8 p.m. on Friday in the funeral home, and suggests that memorial donations be made to Franklin Masonic Lodge No. 151.

FRANKLIN — David ‘Bully’ Darden, 88, of Franklin, Virginia, transitioned from this earthly life on Tuesday, May 28, 2019, while... read more