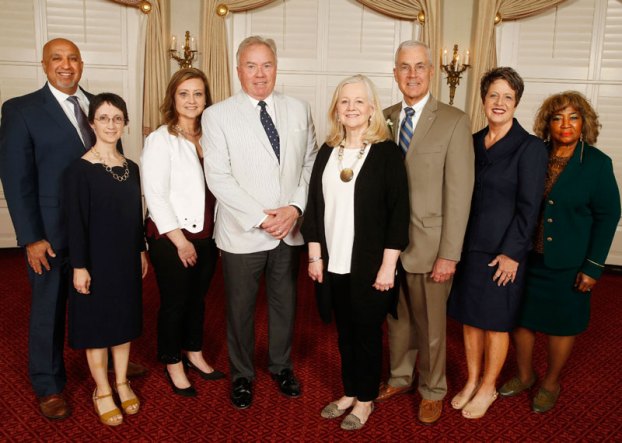 He was recognized along with two dozen other outstanding individuals, families, and businesses from around Virginia for exceptional support of Virginia’s Community Colleges and its foundations. The awards were presented by Chancellor Glenn DuBois at the 14th annual Chancellor’s Award for Leadership in Philanthropy Luncheon, sponsored by the Virginia Foundation for Community College Education.

“Charlie Henderson has been a huge advocate for Paul D. Camp Community College over the past five years,” said Vice President of Institutional Advancement and Workforce Development/Executive Director of the PDCCC Foundation Dr. Renee Felts. “He has given both his time and has shepherded financial support to the college from the Bank of America Foundation, which has helped with a number of things, including costs associated with much needed trade programs.”

In addition, Felts noted that Henderson has participated in many PDCCC Open Houses, the PDCCC Give Local 757 campaign, and has provided guidance on BOA grant applications. “He has a sincere interest in both the success of the students and the college,” she said.

“The Bank of America Foundation focuses on building capacity within the communities that they serve, particularly for the underemployed and the unemployed,” said PDCCC President Dr. Daniel Lufkin. “According to Charlie, PDCCC’s workforce development programs have proven successful by creating positive change in the earning power of our students, as well as advancing our local economy.”

As part of the philanthropy award, each college will be awarded funds for the Commonwealth Legacy Scholarship, to be named in honor of the college’s 2019 Chancellor’s Award recipient.

This year, among those to be honored were four members of VCCS faculty, all of whom have made contributions that have helped their colleges and their students grow. This year’s class of distinguished philanthropy leaders has contributed a combined total of more than $18 million dollars to Virginia’s Community Colleges.

Donald Graham, keynote speaker and Chairman of the Board at Graham Holdings Company and Co-Founder of TheDream.US, spoke about the importance of Virginia’s Community Colleges and the ways that the philanthropists have contributed to the Commonwealth.

“We are in this room today to tell you, whether you work for one of the colleges or have given to one of the colleges, that what you are doing is absolutely right,” Graham said during his remarks. “I am so proud of this crowd for what you’re doing, and I hope you are proud of yourselves and your fellow donors and of the leaders and teachers at the community colleges you serve.”

For more information about the PDCCC Foundation, contact Dr. Renee Felts, rfelts@pdc.edu or 569-6760.

By Wendy Harrison SUFFOLK When Shakeim Fleshman casually tossed a corn hole bag, he had no idea how hard it... read more