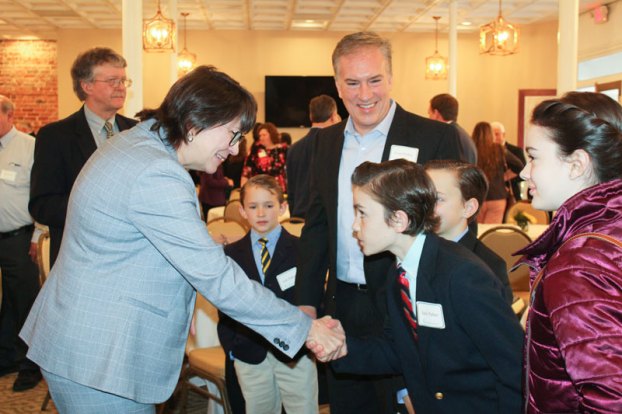 Virginia Secretary of Agriculture and Forestry Bettina Ring shakes hands with Jack Parker after her speech during the sixth annual Partners in Progress event on Tuesday morning at Main Event in downtown Franklin. With them are siblings, Joe, Josh, Joy and their father, Evan. In back is Southampton County Supervisor Bruce Phillips. — Stephen H. Cowles Tidewater News 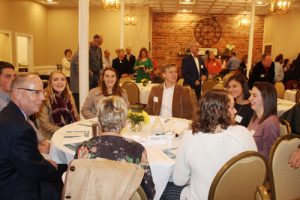 Virginia Secretary of Agriculture and Forestry Bettina Ring praised the partnership between Franklin city and Southampton county while attending as keynote speaker for the sixth annual Partners in Progress event on Tuesday morning in downtown Franklin.

“It’s good to come back to your community and to celebrate a number of things. I love the collaboration in economic development,” said Ring, noting also the area is “very tight-knit and has diversity.”

She said that agriculture is the number one industry in the state, followed by tourism at second and forestry at third. These have brought in several billion dollars and over 400,000 jobs to Virginia. Agriculture and forestry in particular play a very critical role, with agri-tourism and eco-tourism also contributing.

“There’s much to celebrate in this community. Be proud of who you are,” she said. 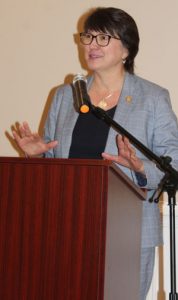 Virginia Secretary of Agriculture and Forestry Bettina Ring praised the partnership in economic development between Southampton County and the city of Franklin. She was the keynote speaker at the annual Partners in Progress report. — Stephen H. Cowles Tidewater News

Ring noted the cards at everyone’s table that outlined local accomplishments of the past year, beginning with Belmont Peanuts. Last autumn, the Marks family-owned business announced it will create a new processing facility and retail store to make and sell its gourmet peanut products. This will be a $2.5M investment and create 15 new jobs. Part of what’s making this possible, added Ring, is a $30,000 Agriculture and Forestry Industries Development grant.

Speaking of expansion, two other businesses that also have involved both localities brought more than welcome news. Announced at the beginning of October last year, Hampton Farms will expand its peanut butter processing plant, a $5.7M investment anticipated to make 14 news jobs possible. This is aided by a $100,000 AFID grant.

About 2-1/2 months later, Enviva Partners declared it will be increase wood pellet production by a third, which is measured at 750,000 metric tons per year. This will become a $75.7M investment, and the expansion is helped by a $400,000 Virginia Investment Performance grant.

Noting that Enviva will be able to use pine trees for its products, the secretary said there’s some “healthy competition” going on between Brunswick and Southampton counties. The former is No. 1 in forestry for the state, and the latter at second place.

[Also of note in 2018 has been the partnership between the Franklin Southampton Economic Development Inc. and the Downtown Franklin Association, which presented the second Startup Downtown project. Three news businesses got money to set up shop: Spoken Interior Homes was awarded $20,000; Children’s Therapy Concepts got $10,000; and the bakery Tiers to You was presented $8,000.

In addition to getting Sheet Metal Products Inc. into the renovated former Winn-Dixie on North College Drive, FSEDI worked with Isle of Wight County’s economic development team to put Quality Aire Co. into the former skating rink near the intersection of Carrsville and Walters highways.]

Other exports that Western Tidewater offers are cotton, soybeans and even watermelons. Ring said this area is the largest in the state for growing them, and one unnamed family devotes 3300 acres to the crop.

The secretary later encouraged Franklin and Southampton to “look at other opportunities,” and mentioned that one of those is growing hemp, which can be made into clothing, textiles, food and rope among other uses.

In addition to emphasizing the importance of bees to the pollination of crops, Ring also encouraged the farmers markets (“Two-hundred and sixty and expanding.”).

The students who attended were thanked and encouraged to explore careers in agriculture or forestry, adding that they don’t necessarily have to “get their hands in the soil,” but can look at the roles that technology can play.”

“There’s a bright future out there,” Ring said to all.