Fishing in the snow

Spirit of Moonpie and I spent the 3rd through the 6th on the Blackwater below Franklin. The water was a little high and fast and 46 degrees.  Air temps ranged from 26 to 52 degrees … and IT SNOWED! 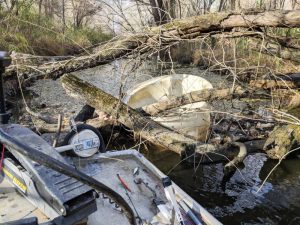 The RiverGuard recently came across this trash in the Franklin stormwater canal. This could be either old trash, which he confirmed some of it was indeed, or garbage being dropped in the ditch downstream of the Bogart retention pond. — Submitted | Jeff Turner

Trash on this trip was pretty bad. I picked up one full bag, but there was much I could not reach. Most of the trash I picked up was actually up in the Franklin stormwater canal. Also, most of it I picked up was on the Bogart leg of that run. That is odd because we have that trash boom in the retention pond upstream. So either that was old trash (and some of it was) or, the trash is being deposited in that ditch downstream of the Bogart retention pond.

It is sad there is so much trash that comes into that canal, for several reasons obviously. One is that the canal is actually very pretty up in there. There is an abundance of wildlife, and it is quit serene to be that close to the city. I think the run which is .38 of a mile long, is an excellent canoe/kayak trip. From the Franklin boat ramp to the terminal end of the canal is a very doable 1.22 miles. If the city would clear a blockage up in the Bogart leg it would be a little longer. I wish folks would go check it out and take a trash bag with them. That would also help keep the river cleaner. I have informed the mayor of my idea to possibly incorporate this canal into the Franklin River Walk/Park plan, if and when that ever gets funded. If you do go, please let me know what you think.

The fishing on this trip was fantastic. The first day I caught a few fish casting, but it was the nasty second day that was the surprise. I knew it was going to be ugly that Wednesday so the hope was to get out of the tent early, do camp chores and get to the bridge in Franklin for protection before the inclement weather began. Thank the good Lord I was able to do that pretty much. It started a cold rain about the time I got in the boat. I made it to the bridge without getting soaked and hung out under there for a while and fished as it rained. After a couple of hours with no hits that got kinda old.

Finally it stopped raining and I checked the radar and it looked like it was going to clear up. So with that info I took off upriver to go try the yellow perch. I found the yellow perch when I got to my spot upriver, but they were very small. However, while fishing for them I started catching speckle. I was stunned as I am a terrible speckle fisherman. Just when I was really having fun hauling in speckle after speckle it started snowing. And then it started SNOWING.

Usually I would have hauled tail back downriver for the sanctuary of the bridge, but the fish were biting so good I just decide to suck it up. It actually was kinda funny I thought. Here I am on the beautiful Blackwater River catching very nice speckles that I never can catch and it’s SNOWING. “Ahhhh,” I laughingly said to Moonpie, “it just don’t get no better than this on either of the two rivers we call the Blackwater and Nottoway Rivers.”