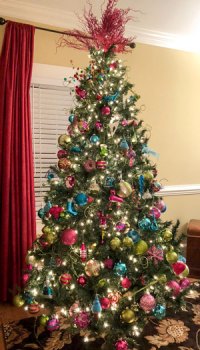 The home of Mark and Wendi Simmons, who both enjoy decorating for Christmas, has a collection of seven trees each decorated with a different theme. 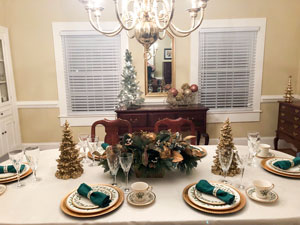 The dining room houses Wendi Simmons' collection of Christmas china, started by her mother-in-law. The table was from the home of Mark's parents. Wendi's great-uncle, Freeman Harrell, made one of the other pieces of furniture in this room.

Christmas has arrived at the home of Mark and Wendi Simmons, located at 28005 Southampton Parkway in Courtland. Mark and Wendi will open their doors to welcome you into their beautiful home to celebrate the 16th Riparian Woman’s Club’s Christmas Home Tour. This takes place from 4:30 to 8 p.m. on Friday, Dec. 7, and from 11:30 a.m. to 3 p.m. on Saturday, Dec. 8.

The home was built in 1937 and sits on the family farm that totals 240 acres, which is being farmed by Mark’s brothers. Mark’s father, Gus Simmons, and his brother, Kilby, farmed the land for over 40 years prior to David and Donnie Simmons taking over the farming business. Mark is the procurement manager for Birdsong Peanut Company in Suffolk. Wendi, a Southampton County School counselor, is a former resident of Emporia, where she lived until 2013.

The two-story farm home was purchased by Mark and Wendi in 2013. The prior owners were Mark’s parents, who bought the home in the early 1950s. The home was added on to in the early 1970s with the addition of closing in a screened-in porch and adding on to it. This room is where the current owners spend most of their time. Also added on was a first-floor bedroom and large family room.

In 1999, the home had a fire where the formal living room had significant damage, but the majority of the home had smoke damage. Renovations were done including adding oak hardwood floors to the formal dining room and living room. The original hard wood oak flooring is still in the foyer and upstairs.

In November 2013, the Simmons’ purchased the home after the death of Gus and Edith Simmons. Prior to moving in, they renovated the entire house including painting, adding on a master bath and knocking down the wall from the kitchen to the sunroom to create one large room. They also removed doors to a closet and turned it into a sports bar area that has pictures of Mark’s favorite golfers and his favorite team, the VT Hokies. The hall bath was also completely gutted and a new one was built. The farm house also has a walk-in attic that covers the length of the house. In 2014, they added on a large carport.

As you enter from the back (the main entrance) you walk into a large utility room with an attached pantry. Next is a spacious updated kitchen with new hardwood floors and a center island that was added in 2015. The open kitchen/sunroom has picturesque views of the family farm as well as Mark’s collection of Mr. Peanut/Planters items. The dining room houses Wendi’s collection of Christmas china, started by her mother-in-law, and a beautiful table left to the owners from Mark’s parents, as well. Also in the dining room is a piece of furniture built by Wendi’s great-uncle, Freeman Harrell, who was also a family friend to the Simmons’. The formal living room was turned into a second den and used as such.

The large family room has handmade bookcases built in on both sides of the room. The original fireplace remains as well. The fireplace was painted in 2016 by Wendi to lighten up the room. Pictures of family and friends add a warmth to the room. You can’t help but notice the presence of the family dog, 18-year-old Sam, as pictures of him are all throughout the home.

What is so special about the home is that most of the furniture belonged to family members of both Mark and Wendi. A china cabinet that belonged to Wendi’s maternal great-grandmother, Evelyn Everett, and then to her grandmother, Marie Goodwyn, sits in the front den. The guest bedroom bed belonged to Wendi’s paternal grandfather Bryan Harrell. Her father, Michael Harrell, recently handed down a Lane cedar trunk from World War II that his father gave Wendi’s grandmother, Marie Pope Harrell. Also special is a bookshelf handmade by Wendi’s maternal grandfather, John “Sonnybuck” Householder. Many other pieces the couple obtained belonged to Mark’s parents and several pieces belonged to two of his aunts, Bernice Gillette and Ruth Babb.

Christmas is a special time in the Simmons home as you will find Wendi’s collection of Possible Dream Santas. Her mother, Brenda Harrell, started her collection in December of 1999, when she purchased her home in Emporia. Since then, she has collected over 85 Santas. The home also has a collection of approximately seven trees that are decorated in themes from nautical to a travel tree. The banister leading upstairs has lit greenery with a special collection of Christmas cards giving it a personal touch. Both Mark and Wendi enjoy decorating for Christmas.

Don’t miss this home as it shouts ‘Merry Christmas’ in every room!

Others whose homes are on the tour are John and Jenny Holtkamp; Fortsville, owned by David and Jessica Yoder; Kenneth Newcomb and Steve Smith; and Mary Ann Renner.

Tickets are $13 and may be purchased at the E-G Chamber of Commerce, Peanut Patch Shoppe in Courtland, any Riparian member or by calling 434-594-4369.

MARY WOODRUFF is a member of the Riparian Woman’s Club.