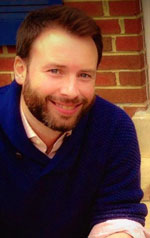 He grew up in Franklin and was a graduate of Franklin High School. During that time he was active in Boy Scouts, the Bronco Band, Franklin Baptist Church, and the YMCA Leaders Club, serving as president his junior year.

He attended James Madison University and graduated in 1999 with a degree in finance, and proceeded to New York City where he worked for many years in the Wall Street financial district at TD Ameritrade, Banca IMI and Fortis Financial.

He later settled in Richmond, Virginia, where he worked at Robert Half, and enjoyed participating in volunteer community service activities.

Walter was dearly loved. He loved his family and friends — having fun with them, taking care of them and helping them. He found joy in music, art, nature, travel, food (often,) TV and movies, naps and comedy. He loved to laugh and make others laugh. He was funny, friendly, charming, thoughtful, loyal and kind. He had a great smile and was a gentleman. He was adventurous and handy — not afraid to attack new tasks learned via YouTube or tedious instructions.

He was a godfather to six children including his nieces and nephews, who adored their “Uncle Walter” as he did them. The minute he entered a room with them there were squeals of laughter and fun. He could light up a room.

Left to cherish his memory are his mother, Betsy Porter Brantley; his sister, Elizabeth “Beth” Brantley Lazarus, her husband, Jim Lazarus, and their children, James David, Sarah Elizabeth, Katherine Ann and Andrew William. Of great importance, Walter leaves his uncle, Luther Ashby “Sonny Boy” Brantley Jr., with whom he had a special bond.

Additionally, he is survived by many cousins including Freddy and Rita Ashby; and many friends including James Urquhart, Graham Boyd, David Boyd, Bryce Bigger, Ryan Darden and Travis Page. Walter was godfather to children of the last two.

The memorial service will be at 2 p.m. on Saturday, Dec. 1, in Franklin Baptist Church.

Memorial donations may be made to the charity of your choice.