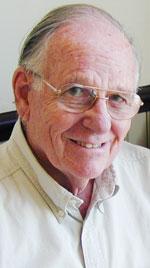 He was preceded in death by his wife of 67 years, Jacqueline Smith Hagan.

He lived with his wife, Jackie, in Suffolk, Franklin and Portsmouth most of his life.

His long career was spent as an engineer at Birdsong Peanuts in Suffolk and Franklin, where he helped design and build peanut shelling mills in Virginia, Texas and Georgia.

He will be affectionately remembered for his strong sense of duty, his enjoyment of spirited repartee, his indomitable character and his innate ability to fix anything that was broken.

The memorial service will be at a later time in Suffolk.

Condolences may be registered at ahlbergfuneralchapel.com.