COURTLAND
Southampton High School had the privilege of hosting a college signing of two young men. Carter Johnson and Joshua Haydu each signed a letter of intent to play baseball for their chosen colleges. Both senior SHS students have excelled in athletics at Southampton High School. Their families, coaches, teammates, Principal Aronda Bell and Athletic Director Tim Mason were present for the signing and recognition. 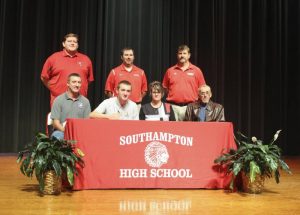 Carter Johnson has been a part of Southampton High School’s baseball program since eighth grade, played varsity for three years and will start his fourth season in the spring. Johnson has received 1st Team and 2nd Team All-District along with Regional recognition. He played travel ball for the Richmond Braves for six years. Now in his first semester as a senior at Southampton High School, Johnson has signed to go to Randolph-Macon College for further his education and baseball career. His parents, Ronald and Trina Johnson, and his grandfather, Charles Bradshaw, joined him as he signed his letter of intent. 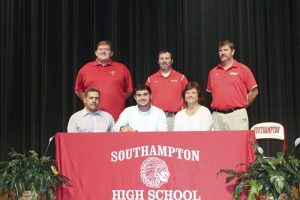 Josh Haydu has been a part of Southampton High School’s baseball program since eighth grade, played varsity for two years and will start his third season on the Indians varsity baseball team spring. Haydu has received 1st Team and 2nd Team All-District awards for catching, along with Regional recognition. He has played travel ball for Swampthings and Top Hand baseball. Haydu has signed to Paul D. Camp Community College to further his education and baseball career. His parents, Mark and Dena Haydu, joined his as he signed his letter of intent.