ISLE OF WIGHT
On Wednesday, three Isle of Wight Academy seniors signed letters of intent to play sports at the college level. 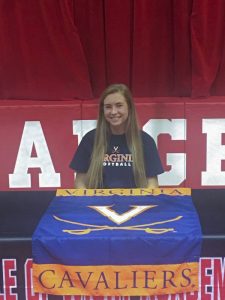 Mackenzie Wooten will attend and play softball for the University of Virginia. — Submitted | Mary-Margaret Wells

Wooten plans to major in kinesiology at UVA. She said she chose UVA for its great academics and because she loved the campus and its coaches. 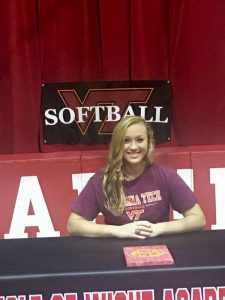 Madison Rountree will attend and play softball for Virginia Tech.

At IWA, Wooten has been named all-conference every year since ninth grade, and all-state since 10th. She was also named conference player of the year during 10th and 11th grade, and during the 2017-2018 school year, was named to The Daily Press’s all-star softball team.

Rountree plans to major in communications at Virginia Tech. When asked why she chose VT, she said, “It’s a beautiful campus,” and that it “feels like home.”

At IWA, Rountree has been named all-conference and all-state since eighth grade. 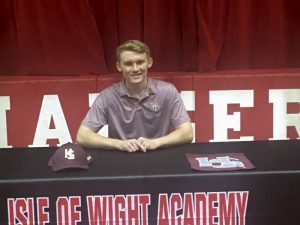 Ryan Boyce will attend and play baseball for Hampden-Sydney College.

Boyce plans to major in business and economics at Hampden-Sydney. He said he chose Hampden-Sydney for its “very homey environment” and because he felt it had a great baseball program.

“I fell in love as soon as I stepped on campus,” Boyce said.

UVA and VT are both Division I colleges, while Hampden-Sydney is Division III.