Cats, canines have a partner in people 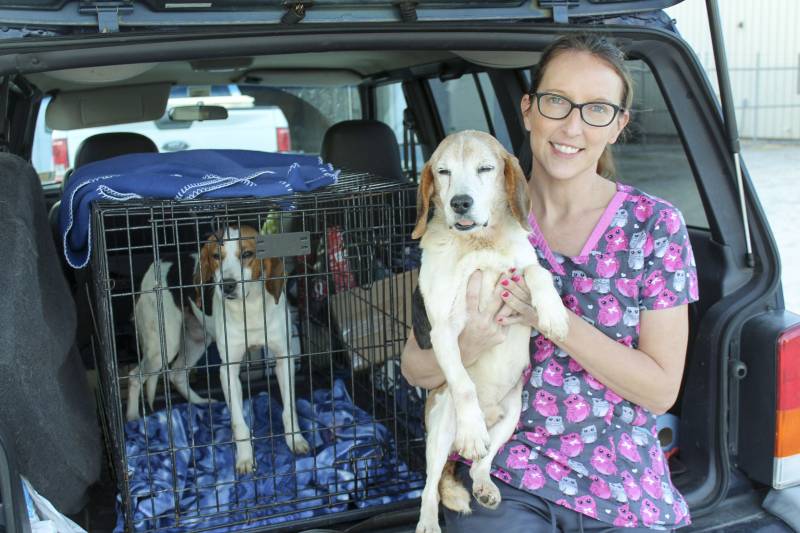 Becky Lowe holds Toto, a 10-year-old beagle. In back is Marshall, who was given up by its owner. -- Stephen H. Cowles | Tidewater News

COURTLAND
On a recent windy and chilly afternoon at the animal shelter in Courtland, Becky Lowe brings two beagles for safekeeping. Corporal David Joyner, the animal control officer, awaits Toto, a stray beagle estimated at 10-years-old, and Marshall, who is 5-years-old, but his owner gave him up. “Surrendered,” as Lowe put it.

The Boykins resident is the area director of Partners Among Cats and Canine, an all-volunteer group that began in 1997, and is dedicated to not only finding new homes for such animals as Toto and Marshall, but also reducing the number of euthanasias. There’s room for only seven kennels at the site.

“We’re making a different a little bit at a time, said Lowe.

She listed some of the services that group does for the lower shelter. These include getting the dogs the basic needed treatments of spaying/neutering, vaccinating and heart worm testing, etc. Spay and neuter vouchers are also given to adopters to have the animal sterilized within 30 days of adoption. Follow-ups are also done to confirm such treatments.

Lowe said a volunteer such as herself will visit the shelter each week to get photos of cats and dogs. The Southampton Shelterdogs Facebook page is maintained to let people know of any available canines and information about them. PACC also keeps up with petfinder account, which is a national database for potential adopters.

Further, the organization networks with rescue agencies and SPCA groups in order to get them to a higher traffic area that can better chances of adoption. Transportation can even be coordinated to those places once accepted.

There’s an option of foster homes for dogs until they are transferred to other facilities or even adopted. She herself is the caretaker of four foster dogs: a beagle, a chihuahua and two pit bulls.

Fundraisers are also organized to provide the vetting services. The organization is having its 18th annual Tree of Lights to support such animal welfare. For a $5 donation, a white light will be illuminated; for $25, a blue light in memory or honor of a special animal or person. The tree is going to be put on the patio at Fred’s Restaurant, and the ceremony will be at 6:30 p.m.on Friday, Dec. 31.

People willing to support PAAC, which is a 501(c) 3 non-profit, can also made donations to the Patricia Gillette Hobbs Memorial Fund, which supports the spay/neuter programs.