Artifact from the past 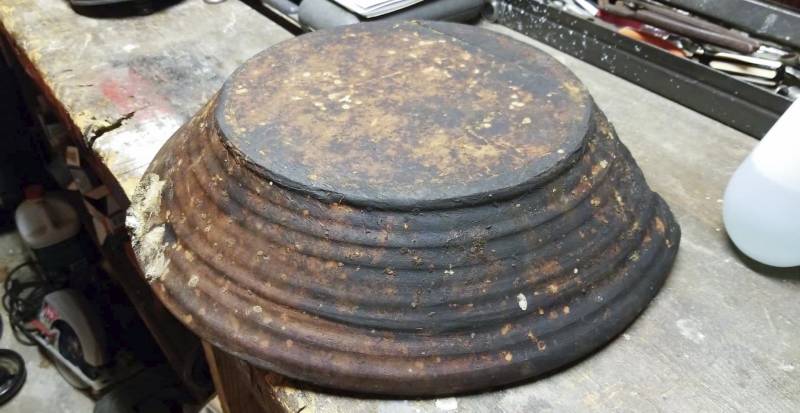 Divers in the Blackwater River at Old South Quay recovered this antique earthenware milk pan, which is possibly from North Devon in the United Kingdom, though it also could have been made in Virginia. The RiverGuard was told its date is estimated at no later than the early 1700s. -- Submitted | Jeff Turner

Spirit of Moonpie and I spent the 10th through the 12th on the Blackwater below Franklin. The water was just right, clear and 57 degrees. Air temps ranged from 38 to 60 degrees and it was windy most of the trip. That wind had a bite to it and was signaling the end of fall I have a feeling.

This was the seventh patrol in a row I have been forced to go to the Blackwater because the Nottoway was high. Aug. 28 was the last time I was able to get on the Nottoway. I do not believe I have ever seen that river remain so messed up with high and muddy water for that long. It also looks like there is no relief from that in the coming next couple of weeks.

And speaking of high water on the Nottoway, I want to address an issue AGAIN that is a problem and could end up really being a mess. The Norfolk Southern RR trestle across the river at Courtland keeps getting blocked from trees getting hung in it. I just had NS clear it earlier this year and now it’s blocked again really bad. Why is this happening? Look no further than upriver where the Assamoosic swamp joins the river. That swamp near the river was logged not all that long ago, and there was so much wood left on the ground/swamp in there that only seeing it in person could you fully comprehend how much wood was wasted and left to rot.

Well, over the years that wood during high water events has been worked closer and closer to the river and now is more easily getting loose and blocking the river and not only at the trestle. This problem is only going to get worse and with NS leaving the area soon, if something don’t change, that river will be permanently blocked to through traffic at that trestle. It is my hope that NS will continue to maintain that trestle, but I do not know if that will be the case.

So, folks that hunt, fish or just boat that part of the river, you better start pitching in and help keep it clear. I have spent hours there working to open that place up and you better do the same. Of course that has to be done along as the wood gets there. People just pass by the stuff when it’s not blocking the whole trestle and that’s the time they need to stop and take the time to work that one tree through the trestle so it does not catch the next one. I’m not going to be around forever to take care of this, so y’all better start putting effort into keeping it clear there or loose access, simple as that folks.

Had a bit of excitement take place down at Old South Quay this week. Some divers I know that were interested in the history of that area did a short dive there on Monday. Old South Quay at one time in the 1700s was the most important inland shipping port around. Trade vessels from the West Indies and beyond did a booming business at the port. They did not find a lot on this short visit, but did recover what is believed to be an earthenware milk pan, according to the experts. The pan would be used to cool fresh milk quickly per its shallow design, which allowed for the cream to rise to the top quicker to be skimmed off. As of this writing, they believe the artifact is possibly imported from North Devon, United Kingdom, but also possibly could have been made by a potter in Virginia as well. Date is estimated at no later than early 1700s. So that is very exciting to me, and I hope they will return soon and continue the search. There needs to be more documentation and emphasis/awareness made of this most significant industrial operation that was part of our local history.

Trash on this trip was very light, I only picked up about a bucketful. That’s pretty amazing for all the rain we have had. Franklin must be doing a good job with the ditch maintenance and street cleaning, etc., and hopefully the boom is helping in the Bogart retention pond. My trash collection totals are really going to be down this year and I’m not complaining about that at all!

The Moonpie Critter patrol yielded a bunch of deer on this trip and we even saw a buck chasing a doe over behind the I.P. wet log facility. They ran right along the shore 25 feet from us and never saw us sitting there in the boat. We also saw right many ducks on the river and tons of squirrels. So many squirrels, in fact, that we invited two to come home with us for dinner.

The fishing on this trip was pretty good. I caught a couple raccoon perch and four chain pickerel casting. I also ran nine limb lines one night and caught five cats. I thought that was pretty decent being I only had frozen cut bait to use and a little bit of fresh jack gut. None of the cats weighed over 7 pounds, which was fine with me. I hate cleaning them over 15-pounders. I think it will not be long before the water temps really start to drop and then the fishing will slowly decline except for a few species like the raccoon perch. I hope we have a good run of them this year; it’s been awhile since we have had a great year for those.