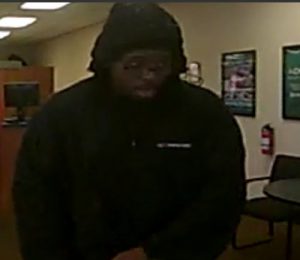 Cameras captured this image of the suspect. He is described as a black male, 5-foot-6-inches, weighing approximately 180 pounds.

Today, Nov. 15, Franklin Police officers responded to the report of an armed robbery at the Check into Cash located at 1200 Armory Drive.

According to Capt. Tim Whitt, spokesman for the Franklin Police Department, officers responded to the call at approximately 11:03 a.m., and learned that a single suspect had entered the business and brandished a handgun. The suspect then reportedly fled on foot toward Stewart Drive after taking an undetermined amount of cash.

The suspect is described as a black male, 5-foot-6-inches, weighing approximately 180 pounds, and wearing a Rental Center jacket, red shirt and glasses.

The investigation is ongoing. Anyone with information about this crime is asked to call Franklin Police at 562-8575 or Franklin Crime Solvers at 562-8599. Information that leads to an arrest can earn the caller a cash reward while remaining anonymous.