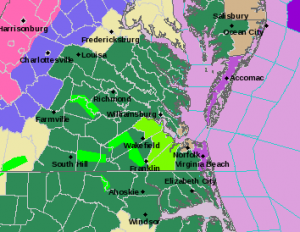 The National Weather Service’s Wakefield Station has issued a flood warning for portions of Southampton County along the Nottoway River, indicated in bright green. The remainder of the county and the city of Franklin is under a flood watch through tonight. Isle of Wight County, indicated in yellow-green, is under a coastal flood advisory. Courtesy | National Weather Service

The National Weather Service’s Wakefield Station has issued a flood warning for portions of Southampton County along the Nottoway River.

According to Eswar Iyer, an NWS meteorologist, the Nottoway is forecast to reach flood stage by Friday afternoon. Flood stage is defined as rising above 16 feet. Iyer confirmed that any flooding would be minor.

The parts of Southampton County not under a flood warning and the city of Franklin are still under a flood watch, but only for the remainder of today, Nov. 15, he said. The Blackwater River is not forecast to rise above flood stage.

Isle of Wight County is currently under a coastal flood advisory, but this is not projected to affect the southern end. Iyer confirmed that the advisory is mainly for the areas of the county bordering the James River and its tributaries, with only shallow flooding expected in vulnerable areas, most likely around high tide this evening.

As of approximately 2:40 p.m., total rainfall for the area measured at just under a half an inch. He said the rain and projected flooding are due to a strong area of low pressure tracking along the Atlantic coast and racing toward the north, northeast.

“It’s producing a wide variety of impacts along the mid-Atlantic,” Iyer said.