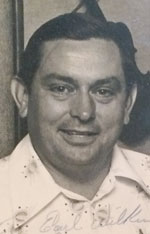 He was born in Suffolk, Virginia, the son of the late William Claiborne Wilkins and Elizabeth Holland Wilkins.

He worked as a manager of a fertilizer company, but went on to work and retire from Tidewater Feed & Seed in Windsor.

He was a member of Colosse Baptist Church and a former member of Antioch Church, where he served as treasurer.

William Earl, also affectionately known as “Squirrel,” was a former member of the Windsor and Walters Ruritan clubs, where he served as past president.

He was a former member of the Windsor Town Council. He volunteered with Windsor’s Volunteer Fire Department and served as a past president.

He was a past president of the Tidewatchers Booster Club. Squirrel was an honorary member of the Grand Ole Opry cast, and was a former special events employee for WCMS radio station.

He loved country music and was an avid New York Yankees fan.

The funeral will be on Friday, Nov. 16, at 2 p.m. in Parr Funeral Home & Crematory with the Rev. Tim Webb and the Rev. Steve Bradshaw officiating. Burial will follow at Holly Lawn Cemetery.

Friends may join the family other times at the residence of his sister, Carolyn Harrup.

Condolences may be registered online at www.parrfuneralhome.com.