[Editor’s note: This story from Nov. 11, 2015, is reprinted to honor Joe Quinton Dickerson and all veterans.]

MURFREESBORO, N.C.
Books and movies about D-Day pale in comparison to Joe Quinton Dickerson’s story. That’s because he knows it at first hand: Dickerson was there when Allied Forces landed at Normandy Beach in France on June 6, 1944. 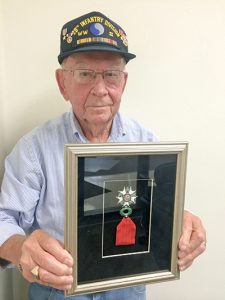 Joe Q. Dickerson of Murfreesboro, North Carolina, show one of the medals he earned for his service during WWII.

His journey to that now fateful morning first began in Woodland, North Carolina, where he was grew up.

“I volunteered,” said the spry 92-year-old Army veteran. “The reason I volunteered is I didn’t like the water — I still don’t — so that’s why I volunteered for the Army. I’d had never been a good swimmer.”

Around 17 or 18 years old at the time of joining, Dickerson of course first went to boot camp, and was later attached with the Rangers at Paris Island, South Carolina. Later he traveled to New York before crossing the Atlantic Ocean to England in 1942.

“I was a rifleman in the 29th Infantry Division of the 116th Regiment, E Company. They’re the ones who led the invasion on June 6,” Dickerson said. “After we had been trained in England for two years, we got a whisper that we would be leading the invasion. We found out in 1944.

“We thought all along we were going to do something, but weren’t sure.”

The departure from England took place around 6 p.m. the day before, but there was no heightened sense of what was to come — at least in Dickerson’s recollection.

“We just didn’t think too much of it at the time We were only about 20 years old,” he said.

“If not for the HBs — made in New Orleans — we wouldn’t have made it on the beach,” Dickerson said with emphasis. He explained that the shape of the craft enabled the troops to land without waves tipping them over.

“That’s when I realized it was the real thing. We circled the mother ship before hitting the beach,” he recalled. “When we hit the beach, they [the Germans] were shelling the beach pretty heavy. After the Germans spotted us, they started firing on us. The Germans zeroed on the boat I was on.”

His height was a factor that helped him from being hit by the bullets and shelling. Dickerson jumped into the water — an irony not lost on him — and went in over his head. Two other soldiers, both 6-feet tall, quickly pulled him up onto solid ground.

Somehow that watch got lost sometime that day.

“I’ve still got my compass and mess kit,” Dickerson said. “That’s all I’ve got — except a lot of memories.”

Securing the beach was the first objective, then the troops went forward to drive the Germans back.

“Which we did, thank goodness. We went about 30 hours without any relief; there was no real relief for about a month, not until a few weeks after the invasion.”

The young soldier didn’t escape unscathed, no sir. His first wound came on the second day, probably a mile from the landing. Artillery from a German II put a piece of shrapnel in his right leg. Doctors took care of that and sewed him up. After jumping over a hedgerow — “France is full of hedgerows” — the leg had to be restitched

A source at www.30thinfantry.org notes that: “From all historical accounts and much other publicity, the Battle of St. Lo was won alone by the 29th Infantry Division,” adding that much help came from the 1st, 35th and 30 Infantry divisions.

“We were trying to stake St. Lo street by street,” Dickerson said. “You couldn’t fire a gun as you could have hit your own man.”

He got into hand-to-hand fighting in that battle, which began in early July. A bayonet split open his right hand.

“Fortunately, I got the best of the man and left him on the ground.”

Fighting continued to Haachen, Germany, where Dickerson got his third wound of being shot in an arm. That put him in a hospital for about three weeks.

“As long as you had the finger, you could pull that trigger,” said the man who had had no familiarity with guns before boot camp.

Progress continued until mid-December when the Germans went on the offensive with a campaign that became known as the Battle of the Bulge, which was in Belgium and Luxemborg. That a turning point for Dickerson.

Not incidentally, Dickerson earned four Purple Hearts, bronze and silver stars for hitting the beach and another silver for knocking out some tanks.

“The Battle of the Bulge … That’s when I got the wound that sent me home,” he said. “The second day, artillery from above penetrated my helmet and into my skull. I was under a coma two weeks and in a Paris hospital when I awoke.”

From then on, though, Dickerson was to recover and serve out his term stateside. Asked where he’d like to be stationed, the many-decorated soldier requested Richmond. In spite of an apparent agreement. he got California instead. He laughs a lot to recall now seeing signs from a train then announcing the approach of the Virginia capital, only to watch them quickly recede from view.

On the West Coast, Dickerson endured 13 operations over 18 months. He still has metal in his head.

“It doesn’t bother me too much,” he said. “I’ll get an occasional headache. I’m lucky … very lucky.”

Dickerson found out his company commander, Capt. Robert Garcia — “I thought the world of him” — was also in California, and visited frequently. “I felt like I was home,” he added.

Foreseeing the Korean Conflict, Dickerson decided he had enough of war. Having accumulated 51 service points to earn an honorable discharge, he hitchhiked his way back to Woodland. By that time he was 23 years old.

“There were people then who would stop and pick you up,” Dickerson said.

Back home, he worked for The Daily News in Murfreesboro, North Carolina, which has long been his home. That’s where he met Jim Pearce, also out of the Navy, and his wife, Becky. (Having kept in touch through the decades, Dickerson and she later married after they were widowed.)

But newspaper work wasn’t for him, and he quit six months later. No sooner back home in Woodland than Dickerson got an offer to work at Western Auto. A week’s trial run became 40 years and two months.

“I bought it after three years,” he said.

Last month, the Dickersons journeyed with friends Bill and Lois Billings of Franklin to the National D-Day Memorial in Bedford, Virginia. This city had reportedly endured the highest per capita losses on D-Day.

The visit brought back a lot of memories for Dickerson, who said that everyone should visit the monument.

“It’s worth your time,” he added. Long retired, the Dickersons travel a lot, something they both enjoy. He also works in the yard. “I stay busy.”

Asked to recall one more detail from D-Day, Dickerson remembered:

“After I got to the beach, I turned around and a lot of my buddies were hollering for help. Some wounded. Some dead. Me and Capt. Garcia pulled people out so they wouldn’t drown.”

Thirty minutes went by without bullets flying around, but not a scratch on him. He didn’t get shot then.

“Somebody upstairs was looking out for us,” Dickerson said. “I can tell you that.”