Spirit of Moonpie and I spent the 30th through the 1st on the Blackwater above Burdette. The water was clear, 52 degrees and 5 ft on the USGS gauge. Air temps ranged from 38 to 78 degrees and, in fact, I saw skeeters and frogs at my campsite. The fall colors were really popping on this trip and it was beautiful up on that part of the river. 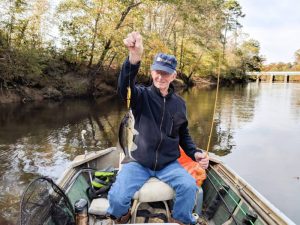 Bobby Turner with one of the 20 bass he caught along with his son, Jeff. In the background is the Gaston pipeline that crosses the river on the old Virginian railroad bridge. — Submitted | Jeff Turner

Trash on this trip was not as heavy as I normally encounter on that part of the river. In fact, I would say someone else has been picking up trash around there. However, I did not venture far downriver from the pump house either and that’s where I usually find the most in all those log jams. I ended up with about a half a bag.

In all my years of camping on the river this was only my third time being out there on Halloween. I even took a little plastic Jack-O-Lantern with me to add the spookiness on that night of River Goblins.  Speaking of River Goblins, Moonpie dressed up like a catfish and I dressed as a stinkin’ old fisherman.  We were quite scary…and stinky. Enough so that no trick-or-treaters came a calling that night!

The main mission on this patrol was …to do nothing except fish, and I pretty much accomplished that except for that little bit of trash I picked up.

The goal was going to be to try to catch some more chain pickerel. I had caught two the day before, one a 4-pound-1-ounce citation. So I picked him up at 2:30 and I told him to tie on the large broken back Rapala I had caught the fish on the day before. I gotta tell ya folks, the next two hours were a blast and a trip I will never forget. When we stopped fishing at 4:30 we had caught a total of 20 bass, the largest going 3 pounds. That’s a great day in anybody’s book!

So I was truly blessed to get a nice warm day with my dad on the river and the fishing to be so fabulous. That was so much fun and so remarkable for this time of year. It is truly a day I will always cherish on the two rivers we call the Blackwater and Nottoway.