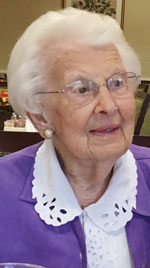 “Mama Helen” was raised by her parents in the Carrsville community of Isle of Wight County. Upon graduation from Carrsville High School, she attended Fredericksburg State Teachers College (now Mary Washington University.) She said that she didn’t need four years, as she had learned all they could teach her in the one year that she attended.

She was an active member of Franklin Baptist Church, serving in numerous positions of the church, including being one of the first women to serve as a deacon. She served in a number of other capacities, such as leadership positions in the youth, Sunday school, circles and WMU. She helped organize the first Home Demonstration Club in Southampton County.

Helen was the sole founding survivor of the Wednesday Night Bridge Club, which disbanded after 59 years of fun, fellowship and a little bit of card playing.

She and her husband, William, were instrumental in the development of the Southampton Agricultural and Forestry Museum in Courtland, Virginia.

Her love of flowers was a gift she inherited from her mother. She had a fondness for daffodils and planted them all over her yard and in the median in front of her home for all to enjoy.

Her family members were known to beg and plead just to gets her rolls, pickles, yams and molasses cookies. Her cards (which almost always included a cartoon,) letters, cookies and phone calls will be missed. The family conversations around the dinner table at the beach, and at other special occasions, will never be the same. Her ability to remember every detail of every event was an amazing feat.

The family is thankful to Vickie Hawkins, LaVern Barnes, Delores Eley, Kenasia Barnes and Angelia Reid for their loving care of both Helen and William over the years.

The service to celebrate Helen’s life will be in Franklin Baptist Church on Saturday, Nov. 3, at 2 p.m. Visitation and a reception will immediately follow in the fellowship hall.