FRANKLIN — Edward Francis Hudson of Franklin, Virginia, passed away peacefully on Oct. 28, 2018, with his family at his side. 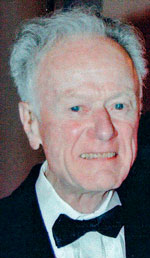 He had a wonderful and loving 94 years as a son, husband, father, grandfather, great-grandfather and a good friend to all he crossed paths with in his life.

Edward was a son of the late Malachi Francis Hudson and Marian Streeter Leonard, and pre-deceased by his brother, Alfred Leonard Hudson.

Ed was born in Brooklyn, New York, and grew up in Staten Island, where he and his brother were very active in Boy Scouts.

He was a member of the Lambda Chi Alpha fraternity, and graduated as a chemical engineer from the Polytechnic Institute of NYU in 1949. He interrupted his education to serve two years in WWII with the U.S. Naval Air Corps, where he was a Navy pilot and received his Ensign commission.

Ed was always proud of the fact that as a New York City boy he earned his Navy wings before he ever had a driver’s license, a wonderful testament to one of our heroes from the “greatest generation.”

Ed spent his entire professional career in the paper industry as a Technical Service Engineer traveling the country to help troubleshoot customer issues. This included lifelong membership and terms as Chairman of both the Metropolitan and Empire State Sections of the Technical Association of the Pulp & Paper Industry.

He moved to Franklin and later retired from Union Camp Corporation in 1990.

Ed and Carolyn were then able to enjoy travel around the world on many trips for some 10 years.

Ed was actively involved in community activities and leadership roles his entire life. He was a member of the Christian Science Church everywhere he lived, serving several terms as First Reader and numerous other committee positions.

He was involved in Boy Scouts of America for over 70 years, most recently as the former Siouan Rivers District Commissioner.

He was very active in the Franklin Area Chapter of the AARP including past roles as president and Secretary.

Interested in family history, Ed served as librarian on the Board of Assistants of the Virginia Mayflower Society.

The family will receive friends and neighbors from 5 to 7 p.m. on Thursday, Nov. 1, in Wright Funeral Home, Franklin.

The private ceremony and burial with military honors will be held later at Newton Cemetery in Newtown, New Jersey.

In lieu of flowers, the family requests contributions may be made to the Franklin-Southampton Area United Way or the charity of your choice.

Dearly loved by all, Ed will be greatly missed.