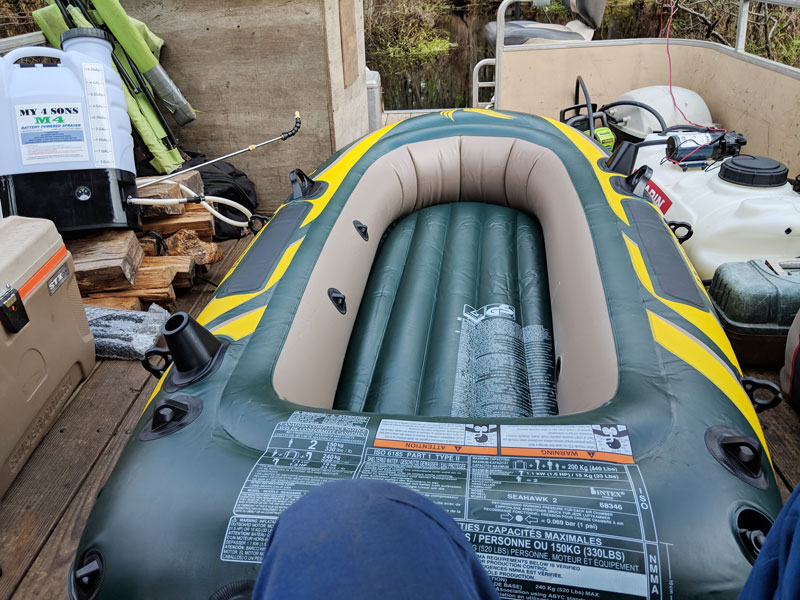 The RiverGuard brought a two-man rubber craft in an attempt to combat the alligator weed. But that proved easier said than done. -- Jeff Turner

Spirit of Moonpie and I spent the 17th through the 19th on the Blackwater below Franklin. I believe fall has truly arrived this time for real. Air temps ranged from 42 to 70 degrees and the water was clear and 64 degrees.

Trash once again was very light and I saw no water quality issues. In fact the river looked very healthy with all that stagnancy gone. It even smelled better.

So my plan this trip was to attempt to get at the originating alligator weed sites that I have not previously been able to attack. The theory being that if I cannot eradicate the weed from those mother locations I will never completely kill it off. Needing a vehicle to get me where the pontoon boat could never go, I purchased a two-man rubber raft since it is lightweight and easily storable. I also purchased a small 4-gallon battery-powered sprayer that would be better in the dingy. This was gonna be my brilliant attack plan to finally eradicate this scourge.

It didn’t work my friends. For one thing, a rubber raft is not designed for disabled people. That’s supposed to be funny! It was quite a scene trying to get in the squirrely thing from the pontoon boat. Then trying to drag the 50-pound “lightweight” sprayer off the mother ship into the balloon boat proved to be a disaster. When it landed in the raft it would not stand up and so it leaked herbicide into the raft, which then meant I was sitting in that bad stuff. Also a rubber raft is absolutely not a steerable paddleable boat. Yeap, I think I just made up a word.

You hit a lick on one side with the paddle and the damn thing just turns, hit on the other side and it turns the other way only producing about 6 inches of forward travel. On top of all that, when I returned to the mother ship I found I could not get out of the raft and back on the pontoon boat. I was left with no choice other than to bail out of the dingy into very chilly 64-degree water.

Even then I still did not have the strength to hoist my lard butt out of the crotch-deep water onto the front deck of the pontoon boat. Eventually, I was able to crawl up on one of the pontoons and make my way aboard. I was exhausted and pretty beat up.

But what was most disheartening was what I saw when I forced my way back into the alligator weeds fortress. It was everywhere, lots of it and mixed in with the other vegetation way farther back than I could ever hope to get to. The only way it could ever be killed would have to be done by helicopter and that would be dangerous in itself under that power line. I also discovered the weed along the mills B pond dam, between the dam and the river. If that stuff ever got into that pond and survived it would be bad for the mill and bad for the river.

Alligator weed is both terrestrial and aquatic, so it can spread on land and water. The weed can survive pH levels between 4.8 and 7.7, so I’m hoping the effluent in that pollution pond is such that the weed cannot survive there, if not, it WILL get in there eventually.

After the fiasco at the primary mother location, I did not even attempt to go after the far-reaching weed at the 58 by-pass bridge, it just was not worth the effort. So I hate to say it, folks, but I am defeated by a weed. I know now I can only keep it in check, which would mean I would have to spray forever. I’m not going to do that, I don’t want to be exposed to that chemical for the rest of my life. It is my sincere hope the 20 or so patches I annihilated, and the massive kill back I did on the mother locations, will at least retard the spread of it for a while.

One wild card we never knew about during this whole thing is how long has the weed been there. If I knew that I would have some idea of how fast it’s spreading on the river. So I hope its been there a long time.

I apologize for my failure, I did the best I could do on the two Rivers we call the Blackwater and Nottoway.