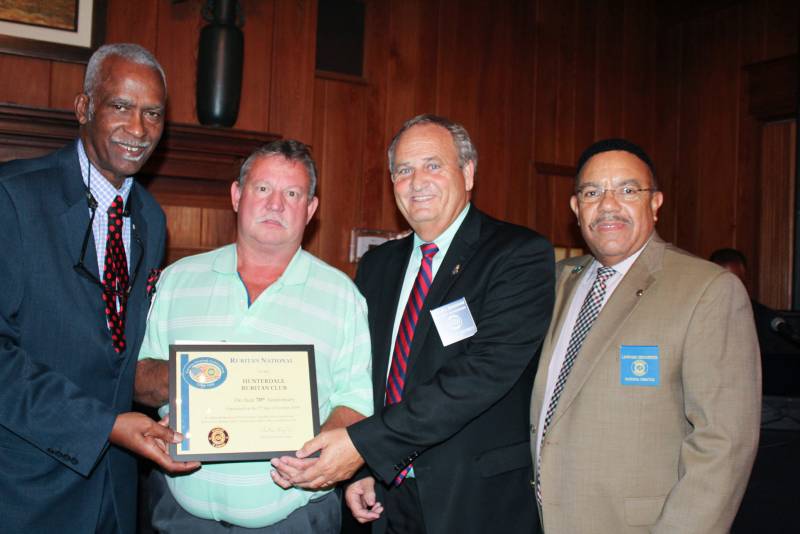 HUNTERDALE
This year has become a significant one for the Hunterdale Ruritan Club because it marks the 70th year that its members — past and present — have been serving their community.

Earlier this month, the club hosted a dinner celebration in the Cypress Cove Country Club, complete with visits from zone governors.

Murray Turner, who has served as secretary and treasurer for years, remembers his introduction took place in 1985.

“My boss at the time got me to join. A friend and I came to the meeting. We liked what the club was doing and joined the next month,” he said. “I moved up through the ranks — club officer, lieutenant zone governor, zone governor, lieutenant district governor and even district convention chairman.”

Turner emphasized that the Hunterdale club is all about service.

This “giving back” usually comes in the form of money generated by fundraisers, such as the popular annual Western beef barbecue, which got started in 1963.

“That’s grown over the years,” he said.

For 25 years now, the club has sponsored six or seven teams for youth baseball, three or four of them in the fall. Members will work the concession stands and offset other costs.

Turkey shoots and fish muddles are other activities. The club regularly cleans a roadside and will park cars at the county fair.

Turner said the club has donated over one million dollars back into the community since it started.

Freeman Harrell, who has 54 years of perfect attendance, also became a member after attending a meeting or two.

“I was invited by Mr. Lute, who used to be here. He was in the club and he invited me. I enjoy the work they did for the community and so forth,” said Harrell, who later went on to become club president one time.

“I always enjoy the dinner meetings. There’s always something going on, such as the beef barbecue in the spring. I like the camaraderie with the guys,” he added.

Harrell said he recommends people join in to “help to do good things for the community,” and added,  “We give most all the money we earn away. — Boy Scouts, fire departments, about 15 things.”

Steve Ezzell Sr. is the youngest member at 48. He points to Harvey McLemore who got him into the club. Ezzell said he was already familiar with the organization, having attended a Ruritan function. He remembered that his maternal grandfather, Ashby Blythe, belonged to the Sedley Ruritans.

“I liked what I saw. He [McLemore] brought me to a meeting and the rest is history,” said Ezzell, who works as the event specialist for PDCCC.

Already Ezzell has helped with the aforementioned barbecue as well as attending meetings.

“I just the family atmosphere,” he added.

James Barnes and Murray Turner have compiled a history of the club. Here are some highlights:

• Ruritan National, which was organized in Holland, Virginia, on May 21, 1928, now had clubs in most of the communities in the Tidewater area. The word Ruritan is a combination of two Latin words: “ruri – open country, and “tan” — small town life. Daisy Nurney, a Norfolk newspaper reporter, is credited with giving the organization its name.

• Several men from Hunterdale decided that the area should have its own club. Organizers included Marvin Whitley, Gordon Bridges, and Farmer Barham. At an earlier meeting, the group had met and elected officers. The club was officially chartered on Oct. 5, 1948, in the Bethel Friends Meeting House. The club was sponsored by the Sedley Club with 31 charter members. It was agreed that the ladies of Hunterdale Christian Church would alternate serving meals each month with the Bethel Friends Meeting House ladies.

• The first money-making project appears to have been a Turkey Shoot. As the project was successful, the club continued to have the turkey shoots for several years.

• The Club erected official Ruritan signs on Hunterdale Road in March 1949 and agreed to sponsor a Boy Scout Troop. Members ordered 150 “town tags” to promote Hunterdale. The plates sold for $2.00 each.

• By 1961, the group had taken an interest in getting street lights installed. At one point, Hunter Scott had agreed to add 50 cents to the monthly water bills to cover the cost. From the meeting minutes, it appears the Ruritan Club underwrote the project and solicited fund contributions from Hunterdale residents to pay VEPCO. This project continued until Southampton County took over the street lights in the 1970s.

• Much of the money raised during the early years went to the Hunterdale Volunteer Fire Department, and the club proudly drove the fire department’s new fire truck in the Southampton County Bicentennial parade.

• It seems that club members were involved in a youth baseball program almost from the beginning. Games were played at the Hunterdale Park, which was located on Delaware Road on the sight of the present Basnight store. In 1953, the club donated $400 for playground equipment. The ladies were charging $1.25 per meal and membership had grown to 50.

• In March 1963 it was proposed to hold an annual western beef barbeque similar to the Shad Planking, which the Wakefield Ruritan Club had annually. The date was set for the “Third Wednesday in May”, one month after the Shad Planking. The first barbecue was held on May 15, 1963, at the Bronco Rod & Gun Club. 1,000 tickets were sold at $2.00 each and the club netted $644.91. The following year the profit grew to $1,402.80. After the barbecue began, the membership started to grow.

• In 1998, the club celebrated its’ 50th anniversary with Bill O’Brien, a charter member serving as Club President. Since that time the club has continued many projects. In 1994, the club again started sponsoring youth baseball, which it continues today.  Other noteworthy items that the club started were roadside cleanup, parking cars at the County Fair, scholarships, and donations to Mustang football, YMCA, and The Children’s Center. The Hunterdale Volunteer Fire Department and the Boy Scouts continue to benefit from the club as they have from almost the beginning.