FRANKLIN — Norma Hoth Hall passed away at Your Life Memory Care of Pensacola, Florida, on Tuesday, Sept. 25, 2018, from complications of Alzheimer’s disease. Norma was 87 years old. 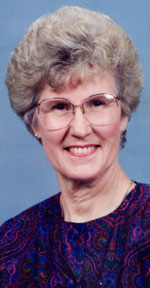 Norma had many other special people in her life including wonderful neighbors and friends and many loving nieces and nephews.

Norma was preceded in death by her husband, Donald Harry Hall, in 1988; and a son, Kevin Donald Hall, in 1984. Norma was also predeceased by her parents, six sisters and one brother.

Norma was born in Brant, New York, to Norah Colvin Hoth and Frederick Albert Hoth on Feb. 3, 1931. Norma enjoyed being the youngest child in a large family of eight children. She had fond memories of living on her parents’ farm and enjoying large family gatherings with her sisters, Gertrude, Lillie, Lena, Dorothea, Mildred, Claribel, and her brother, Malcolm.

Norma married Donald in 1952 and proceeded to have her two children, Kevin and Diane, before moving to Virginia from New York in 1965, and ultimately settling in Franklin in 1967. Norma made her life in Franklin for 51 years before moving to Florida to be closer to her daughter in February 2018.

Norma took time each day to thank God for all that He had given her. Norma loved her home, especially working in her yard and tending all her beautiful flower and vegetable gardens. Norma loved nature, especially the birds and rabbits that found their way into her yard. It was not unusual to find a stray cat or two at Norma’s door receiving food and water.

Norma worked as a bookkeeper at the Bristow Insurance Company and then the Dairy Queen Main Office, both in Franklin. After formally retiring, Norma worked part-time at Farmers’ Produce (Ace Hardware.)

The memorial service will be at Wright Funeral Home in Franklin, on Saturday, Oct. 27, at 1 p.m., with the Rev. Nathan Decker officiating. The funeral will follow in Southampton Memorial Park.

The family will receive friends one hour prior to the service.

There will be a reception following the service in the Back Porch & Grille at The Village at Wood’s Edge.

In lieu of flowers, donations can be made in Norma’s name to either High Street United Methodist Church or The Village at Woods Edge/Asa’s Neighborhood in Franklin, Virginia; or to Your Life Memory Care of Pensacola (Florida.)