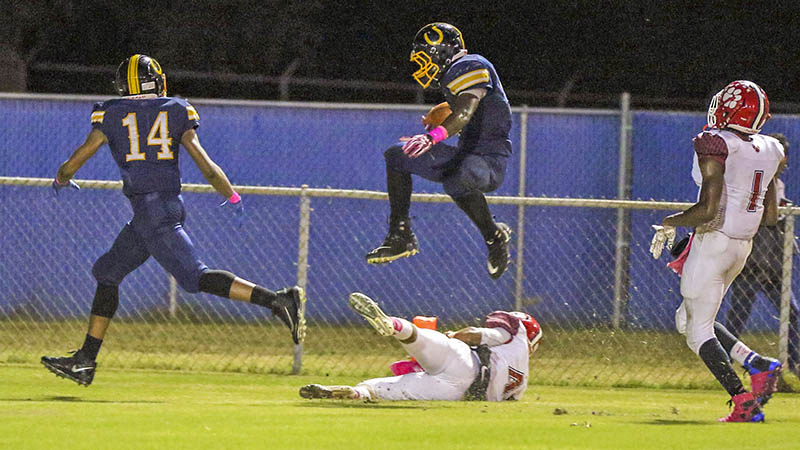 DaShaun Butts jumps over the last defender for a touch down run.

FRANKLIN
Early in the fourth quarter of the football game, the Sussex Tigers were ahead 14-12. The Broncos’ Demarcus McDonald crossed the goal line on a run to put the home team ahead 18-14 with 9:01 remaining in the game. A 2-point conversion attempt failed.

The Tigers, taking a time out, were now faced with fourth and fifth for the first down. The game clock was now down to :55. As the ball was snapped for either a first-down run for the Tigers — or a defensive stop and the game win for the Broncos — all eyes watched as the Tigers attempted to go around the right side of the Broncos’ defensive line.

As the play advanced, the Bronco defense stopped the runner well short of the first down marker. As the game-winning stop was made, many of the Broncos on the field jumped in excitement of this defensive success.

This very rare Monday night game was the result of an unwanted visitor named Michael that came through the Franklin area last week. The game scheduled for last Friday was postponed until Oct. 15 at Armory Drive Park Football Stadium.

The game opened with the Tigers fumbling the ball twice on their each of their opening two drives. The second fumble opened the door for a touch down run by DaShaun Butts. The kick by Leon Otto failed. The Tigers’ Tyree Rose scored on a 20-yard run in the second quarter. Also late in the secnd quarter, the Broncos’ LaSean Nichols-Porter broke free for a 10-yard touch down run. The 2-point conversion failed, but the Broncos held the led with a score of 12-6, which held to the end of the first half.

In the third quarter of play, Bronco quarterback Myroen Barrett was intercepted by the Tigers, who carried the ball for a touchdown. Their 2-point conversion was good to put the Tigers ahead 14-12.

The Broncos were led in rushing by LaSean Nichols-Porter with 80 yards, followed by DaShaun Butts with 43 yards. They rushed for a total of 182 yards. Bronco quarterback Myroen Barrett attempted nine passes with one completed for total of 32 yards.

For defense, Kemond Rogers led in tackles with six, followed by Juhan Carr with four tackles.

In comments after the game, Bronco head coach Karl Robertson stated, “It was definitely a team effort tonight. But not only the team but also coaches as well. We had to step up through some self-inflicted adversity that we should not have had. But at the same time we were able to stay vigilant and kept working and plugging ahead. We know that it is not going to be easy every week and nobody is going to lay down for us, but if we stay faithful in each other and the system and want to win as a collective unit, then we believe that we can get the job done. It was not just us tonight on the field. It was truly a blessing to have the energy to get everything taken care of tonight and we truly know where our strength comes from. And now we will move on to Friday and we will let Friday take care of itself, but we will enjoy this one for 24 hours.”

The Broncos, now 6-1, will be on the road this Friday in a game against Greensville High School at 7 p.m. 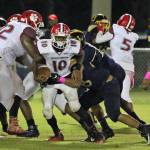 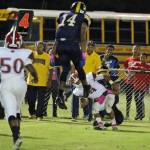 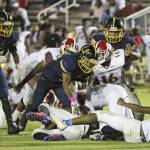 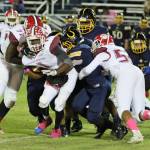 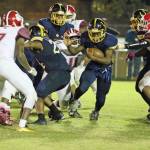 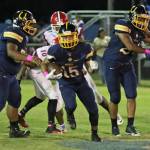 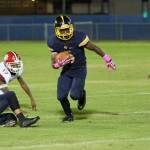 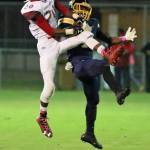