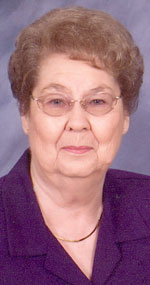 She was a daughter of the late William Drew Lowe and Maggie Odell Ballard Lowe, and was also predeceased by three sisters, Dorothy Turner, Helen Duck and Mabel Lowe; and two brothers, William Ballard Lowe and Stanley Lowe.

Jessie Mae was a school bus driver for the Southampton County School System for 28 years, and a member of Black Creek Baptist Church.

The funeral will be conducted at 2 p.m. on Thursday, Oct. 18, in Black Creek Baptist Church with Pastor David Patton officiating. The burial will follow in the church cemetery.

The family will receive friends in Wright Funeral Home on Wednesday from 6 to 8 p.m., and suggest that memorial donations be made to Black Creek Baptist Church, 34163 Vicksville Road, Franklin.

The family would like to thank the Assisted Living staff of The Village at Woods Edge for their love and care.