Looking back: Sycamore celebrates its founding

FRANKLIN
On Oct. 11, Sycamore Baptist Church celebrated its 140th anniversary. Prior to October of 1878, the Rev. Hersey Parker of Buckhorn Baptist Church, Como, North Carolina, had been preaching under a bush shelter in the Sycamore community, about once a month. 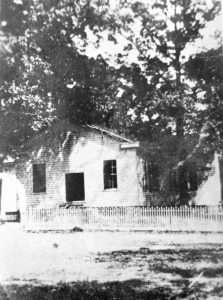 This is an early meeting place for the congregation of Sycamore Baptist Church, which began 1878. — Submitted | Clyde Parker

That October, some of the brethren decided to organize a church. A meeting was held in a private schoolhouse that stood across the road from the present-day church. Chairman O.F. Flippo and James Jones led the meeting. The Rev. W.W. Wood of Richmond, A.W. Norfleet of Franklin and A.L. Gardner of South Quay constituted a council for receiving members. 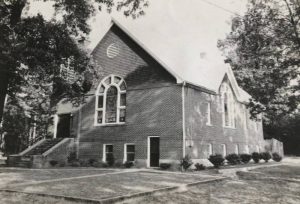 Sycamore Baptist Church before the modernization and expansion.

Interest in establishing an official church at Sycamore was clearly indicated. So, when the Portsmouth Association affiliated with South Quay Church in 1878, Brother James Jones was advised to go to Sycamore and preach; and Brother Joseph Prince, well known for his zeal in the cause of Christ, made the first subscription for the building of a house. To this beginning, Baptist Churches at Western Branch, Beaver Dam, Tucker’s Swamp, South Quay and Black Creek aided the movement.

‘Olivet’ was selected as the church name; however, no one ever used that name — “Sycamore” became the accepted designation.

According to records in the Clerk’s Office at Courtland, the church came into possession of a building site by deed, executed May 10, 1879, by Allen Cotton and wife, Elmina, to Daniel Bradshaw, Augustus Crumpler, and James Vaughan, trustees and their successors. Soon, a comfortable house of worship was erected. On the first Sunday in September of 1879, Elder J.E. Hutson commenced a meeting at the church which, exceeded expectations. The membership was carried from 24 to 43.

Kenneth Burke (1924-1929): A building addition was completed and electric lights were installed.

Gordon R. Price (1930-1934): An every member canvass was conducted and quarterly statements were sent to those in arrears.

Floyd Davis (1934-1938): Joint baptismals with Courtland and Sedley took place, and the Royal Ambassadors were organized as a part of the W.M.U., under the leadership of Mrs. Hunter Darden Sr.

John Isom (1939-1942): During that time, a unified budget process was initiated. A mimeograph machine was purchased. He resigned to enter the Chaplaincy of the Army.

N.D. Blackman (1943-1947): Vacation Bible school was organized. A roll of honor was established in recognition of our men in uniform. Special recognition was given in memory of Joseph Harcum, World War I, and Joe Darden Wiggins and Wilson Holland, World War II.

L.M. Kanipe (1948-1955): During his tenure, the Men’s Brotherhood was started and the choir was reorganized. In 1950, New Testaments were sent to Leo and Leon Bunch, while on duty in Korea.

Vivian Evans (1956-1958): He was the first full-time pastor. Mr. and Mrs. Otto Harcum donated land for the purpose of building a parsonage.

Thomas Downing (1958-1962): During his time, an educational building was erected.

Thomas Mabe (1963-1967): A Church softball team was formed, and additional sidewalks were laid.

Donald Battle (1968-1971): Memorial and recreation committees were formed and a Church Library was established.

James Luck (1972 to 1976): During his time, the cemetery was landscaped and a pictorial history was developed.

William LaWall (1977-1980): He started a program through which students from the Southeastern Baptist Seminary were hired for the summer months. Lawrence Dennis was the first.

David Adams (1980 to 1985): During that time, a P.A. system and personal hearing aids were installed. And, a gift from Temperance and Maggie Vaughan, in memory of their brother Jesse Vaughan, for the installation of an elevator, was received.

The Rev. Dr. Reginald Warren (1986-2003): During that time, the pulpit and choir areas were renovated. A new Allen organ was installed, donated by the Ruth Camp Campbell Foundation and Otto Harcum.

In November of 2007, Ira Burgess Witt was recognized for her 50 years of service as Sycamore’s organist.

In 2007, Ira Burgess Witt was recognized for her 50 years of service as Sycamore’s organist.

Special mention of the late Mr. and Mrs. Paul Camp. Mr. Camp was received into the church by letter from Buckhorn Baptist Church in May of 1887. He immediately began taking an active interest in the affairs of the church, being elected treasurer soon after becoming a member and filling the position until his death in 1924. Mrs. Camp, the former Ella Cobb, had been a charter member of Sycamore.

Their financial support was significant. In 1923, they gave to the Courtland and Sycamore Baptist churches the pastor’s home in Courtland. Their son, Ryland Camp, was also actively involved in the church.

PATSY COTTON FALLS, Sycamore historian, provided information for this story. She is the great-granddaughter of Allen and Elmira Cotton, donors of the land on which the church stands.