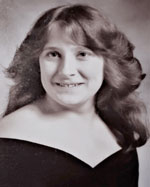 She was preceded in death by her parents, Roland S. and Joyce B. Jackson; and grandparents, Walter and Bessie Bryant.

Robin was previously employed at Crossroads Ford and Amazon Distribution.

Ms. Jackson will be remembered as a loving mother, sister, mate and friend.

The memorial service will be at 3 p.m. on Sunday, Oct. 14, in the Sebrell Community Center, 17324 River Road, Courtland.