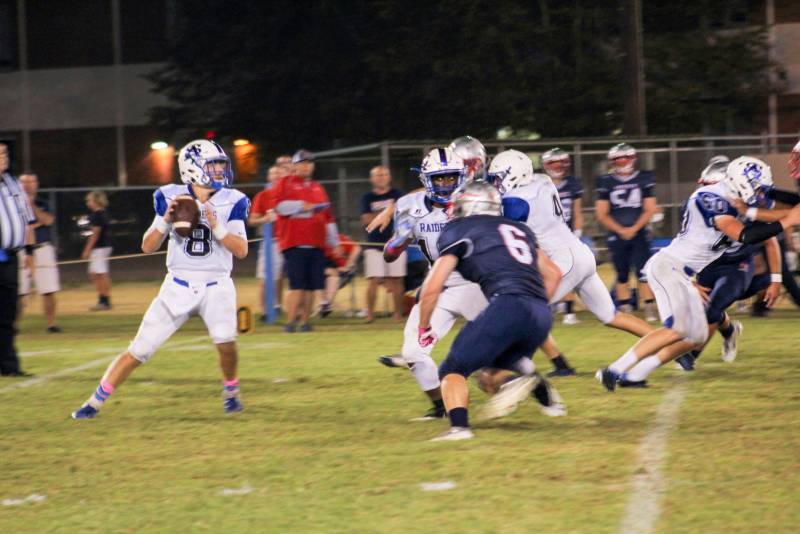 Wyatt Jernigan, a quarterback for the Southampton Academy Raiders, gets in position to throw the ball to a teammate. They played, but lost 42-14 against Faith Christian Patriots on Friday. -- Stephen H. Cowles | Tidewater News

COURTLAND
Southampton Academy started out well against the Faith Christian last Friday, but the game didn’t end that way for the hosts, losing 42-14.

The Raiders got their first points on the scoreboard a little more than six minutes into the first quarter. They made no further advancement themselves throughout the first half, but also kept their opponents scoreless, making the total 8-0.

Come the third quarter, though, the Patriots took command of the field and got their first goal at the 11:10 mark, complete with a 2-point conversion. At 6:18, that team scored again, 14-8; the conversion was no good. This was followed by another goal at 5:17. With the conversion, the Patriots stood at 22-8. They were not finished. With 36.5 seconds left, a pass was completed to a touchdown, bringing the Patriots up to 28-8.

Throughout, the Raiders fought to gain control, but kept getting pushed back.

At 5:52 in the fourth quarter, the Patriots got six more points, but no conversion. Then at 3:25, their final goal with the conversion put them at 42.

Southampton Academy goes to Rocky Mount Academy on Friday, Oct. 12, then to St. David’s School the following week on Oct. 19; game time is 7 p.m. both nights.