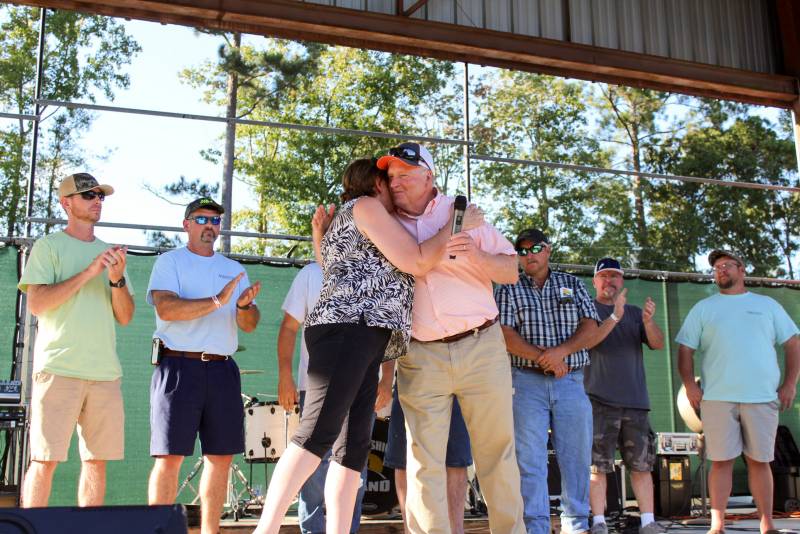 After receiving the donation of the portable trailer on behalf of the Hunters for the Hungry program, executive director Laura Newell-Furniss, hugs William Hart Gillette of the Virginia Hound Heritage. This took place on Sunday afternoon at the Fairgrounds. In back are board directors Chad Ellis, Mark Wright, Troy Cook, Frank Patterson, Pete Rhodes, Jason Hawks and Mike Stewart.

COURTLAND
In between the food, beverages, music and fellowship were a few serious moments during the annual Hoses and Hounds event on Sunday afternoon at the Fairgrounds. That’s when Virginia Hound Heritage’s William Hart Gillette and the directors of the 501(c)(3) non-profit called Laura Newell-Furniss to the stage. She was formally presented a portable, walk-in meat cooler. 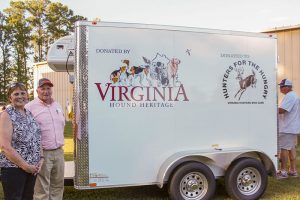 Laura Newell-Furniss, director of the Hunters for the Hungry program in Virginia, with William Hart Gillette of the Virginia Hound Heritage. The organization received this portable trailer, which can be refrigerated, to take deer meat to be distributed to families in need of food. — Stephen H. Cowles | Tidewater News

Furniss gratefully accepted the donation, though certainly not for herself. Rather, it was on behalf of the Hunters for the Hungry program in Virginia, of which she’s the executive director.

During this year’s hunting season, the cooler will be used to collect deer meat that will be distributed by the H4H for people in need of food.

“Virginia hunters are the most generous in the country,” said Furniss. “They’re carrying on a wonderful tradition.”

The program was started by the late David Horne, who was the manager of the Society of St. Andrew, which fellow co-worker Furniss described as a national salvaging program that includes gleaning fields for usable crops. According to www.h4hungry.org, Horne developed the concept, getting input from various agencies such as the Virginia Deer Hunters Association and the Virginia Department of Game and Inland Fisheries.

The new program got started in 1991, and he worked on it until his death in 2002. Furniss succeeded him. She said that since H4H began, 26.6 million quarter-pound servings of deer meat have been served.

“Hunters have always shared their harvest, and given to the feeding program,” Furniss said. “What will this trailer mean? It will allow us to feed more people. There is a greater number of hunters to donate to the hungry. We applaud William Gillette and the Virginia Hound Heritage for stepping up when they learned of our need [for more coolers.”]

Locally, hunters may contribute by donating a field-dressed deer at a collection site. In Southampton County, this will be from Nov. 17 through Jan. 5. Contact Merrell Carr of the Ivor Community Hunt Club at 635-9198 for details. To learn more about the program and how you can contribute, contact the organization either via the website or by calling 800-352-4868 or 434-299-6050.

The Hoses and Hounds event was the third such activity organized by the Heritage group. Done in cooperation with the Boykins Volunteer Fire Department, the fundraiser in its first year bought bulletproof vests for K-9 units of the sheriff’s departments in Southampton and Sussex counties.

To find out more about the Hound Heritage group, call Gillette at 651-8137.