NORFOLK — Mr. Richard S. Riddick of Grandy Avenue transitioned to be with the Lord on Oct. 2, 2018, while a patient in DePaul Hospital. The Como, North Carolina, native was born on July 16, 1932. 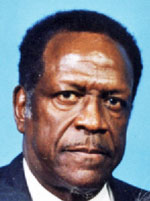 The visitation will be on Saturday from 5:30 to 7:30 p.m. in Second Calvary Baptist Church, 2940 Corprew Ave., Norfolk, where the Rev. Dr. Geoffrey V. Guns is the pastor.

The celebration of Richard’s life will be on Sunday, Oct. 14, at 3 p.m. in Diamond Grove Baptist Church, 30466 Riverdale Drive, Franklin, with the Rev. C.L. Myrick delivering the eulogy. The committal and benediction will be held in the church cemetery.