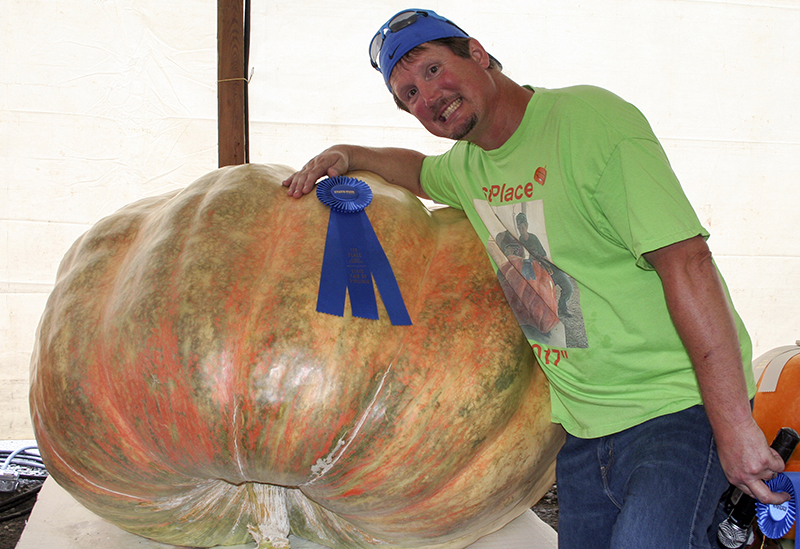 Ricky Atkins is becoming a Southampton County legend! He won the giant pumpkin competition at the State Fair of Virginia today. It weighed a whopping 1,217 pounds. -- Submitted

COURTLAND
What do you do with a 1,217-pound pumpkin?

Well, if you’re Ricky Atkins, there’s only one thing to do — load it into your pickup truck via a crane-like lifting net and drive it to the 2018 Virginia State Fair. And that’s exactly what he did. 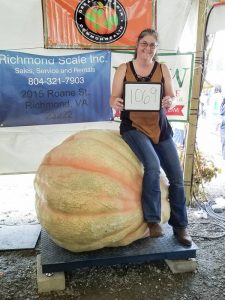 The Courtland resident’s entry not only won first place in the State Fair’s annual “Great Pumpkin” contest, it came within 150 pounds of being the new state record — set by Spotsylvania County resident Hank Houston in 2015 with a pumpkin weighing 1,340.7 pounds. Atkins’ 1,217-pound pumpkin is his third consecutive first-place win at the State Fair. It’s also the largest pumpkin he’s ever grown to-date, he said. 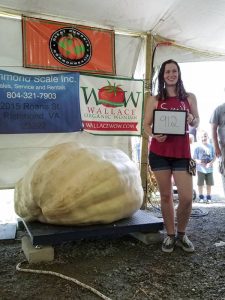 His stepdaughter, Brittany Johnson, won third place with a 912-pound pumpkin, and his other step daughter’s fiance entered one weighing 654 pounds, which won sixth place, the Howard Dill Award and the title of “prettiest pumpkin.”

Atkins also grew a cantaloupe this year weighing just over 30 pounds, but it rotted before he could transport it to the State Fair.

Brenda said, “People kept telling us ‘You will never be able to grow a pumpkin over 1,000 pounds in Southampton County because of the weather here,’ but I think we have now proved them wrong. Growing giant pumpkins is a lot of work and time consuming. It can be an everyday thing for several months.”

Growing giant pumpkins, Atkins said, involves much more than just using seeds from a record-breaking progenitor — which is what he did in 2016, purchasing seeds from the Guinness World Record 2,323-pound pumpkin grown by Beni Meier of Ludwigsburg, Germany, in 2014. That record has since been broken, and is currently held by Mathias Willemijns, also of Ludwigsburg, for a pumpkin weighing 2,624.6 pounds.

Growing the largest possible pumpkin also involves ensuring that each crop receives the perfect amount of water, Atkins said. Too much, and the pumpkin’s insides will outgrow the shell, resulting in cracks and possibly rotting. Too little, and growth can be stunted.

As for the process of growing large cantaloupes, he said he goes “easy on the nitrogen, about half the water intake” as compared to what he would do for a pumpkin. The world record for a cantaloupe, he said, stands at 57.75 pounds.

“Mine [would have ranked] about 12 in the top 500 heaviest cantaloupes,” Atkins said.

Despite the loss of this year’s giant cantaloupe, Atkins still holds the state record with one in 2015 weighing just over 42 pounds.

Atkins has since sold the pumpkins to Cox Farms in Centreville for their Fall Festival, and donated one to a small business.