Broncos victorious in homecoming over Cougars 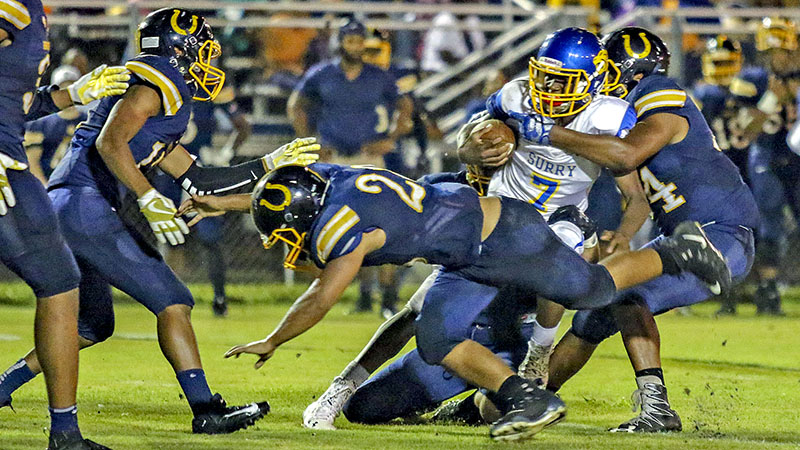 FRANKLIN
Everything that could go perfect for a Franklin High School Homecoming football game happened on Friday at Armory Drive Park Football Stadium. The band played, the cheerleaders cheered, the alumni came and the queen and king were crowned. But the most important element of the whole thing, the Broncos defeated easily their longtime rival, the Surry High School Cougars, 48-12.

The Broncos showed that they were ready to play as they marched down the field on their first possession to score on an eight-yard touch down run by Tyvon Carr. Continuing that impressive kicking game, Leon Otto added the extra point for the quick 7-0 lead.

Both teams’ offensives were idle in the remaining of the first quarter, but the Broncos offense got cranked up good in the second quarter. On the ground, Carr scored again on a two-yard run, LaSean Nichols Porter scored on a 9-yard run and Da Shaun Butts crossed the goal line on a 16-yard run. But the most impressive score was a pass from Bronco quarterback Myoen Barrett to Drelyn Ford. After pulling in the reception, Ford shook off a Cougar defender and raced down field for a 37-yard touchdown. 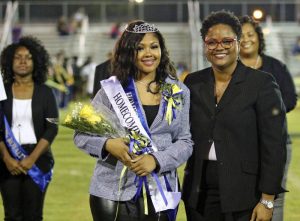 During halftime, the spectators watched as the homecoming court escorted by parents and guardians, etc., were introduced as they walked onto the field. After a drum roll, the Homecoming Queen was announced in the person of Shayla Stovall. Shayla is the daughter of Alisha House and Michael Stovall. She has been in the concert band, Spanish Club, a dance girl and a cheerleader. She was crowned by members of the Franklin High School administrative staff, which included Assistant Principal Joan Sharpe McCullough and Tawanna Bernard. The King was announced as Drelyn Ford, who was not present because he is a Bronco football player and was with the team for halftime reviews by the coaching staff. He was represented by his mother, Atorya Blow.

The Cougars opened the third quarter with a quick 73-yard touch run by Melvin Howell. They came back again in the same quarter and scored on a pass interception by Kahorie Batten. The Broncos’ last score of the game came on a kick-off return touch down run by LaSean Nichols-Porter.

The Broncos were led in rushing by Tyvon Carr with 111 yards, followed by Da-Shaun Butts with 35 yards. They rushed for a total of 182 yards. Bronco quarterback Myroen Barrett attempted nine passes with four completed for total of 119 yards. The Broncos were also impressive with 18 first downs compared to seven for the Cougars.

For defense, Da-Shaun Butts led in tackles with eight, followed by Kemond Rogers with six tackles.

In comments after the game, Bronco head coach Karl Robertson said, “We had a good showing tonight. We came out and gave good effort bottom line. We had to come out and put something different on tape as opposed to what we did last week. We finished strong tonight. We had a couple of miscues and left a couple of things on the table, but at the end of the day we were able to fight back and get our job done. We stayed together as a unit and as a staff and were able to come home with the win. We were blessed to get out of this healthy and on to the next week and keep the train rolling.”

The Broncos, now 4-1, will be at home on Friday in a game against Brunswick High School at 7 p.m. 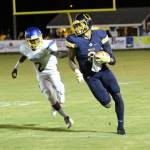 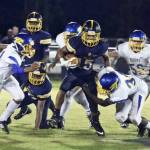 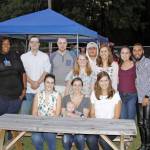 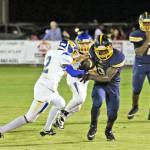 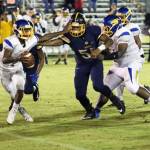 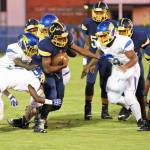