Farewell to a friend

And now the old pickup truck is gone, the one my father occasionally rode shotgun with me in the good old days, the one that carried me across the coastal plain one moonlit July night to his last hours at our Nags Head cottage. 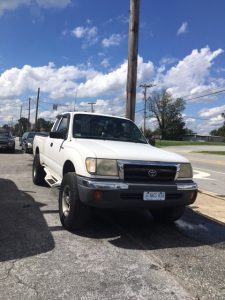 JR’s old truck is off to a new adventure.

I called the 1999 Toyota Tacoma “Peony,” not for the flower, but as a twist on what I started out calling her, “The Pony.”

We two had quite a party, to tweak the classic line rendered by a dying cowboy to his grudging best friend in the TV miniseries “Lonesome Dove.”

I probably should have sold her sooner than last week. But hell, she had given fine service until some hiccups at the end. And we shared memories, as well as magical thinking.

We were in denial, Peony and me, thinking we would be together forever. I know that’s not good English, it should be “Peony and I.” But that pickup agreed with me on many things, one of them being that playing by ear is more important than grammar, even for Carolina English majors like me. Peony knew that because I’d revved the volume on my Doors CDs through her speakers, including the song where Jim Morrison, perhaps the most literary of all rock /n’ roll singer/songwriters, belts out “for you and I.”

Yes, Morrison was grammatically incorrect, but “for you and me” would have just sounded, well, lame.

Just as letting Peony go before her time would have been. Peony was rarely lame.

When we began our romance, her white paint job was spotless. Gradually, my newsprint-soaked fingers gray-streaked the driver’s side door. It gave Peony character.

She had four-wheel drive that pulled us through much snow and ice, a cranking stereo that blared out our eclectic mix of tunes ranging from Hank Williams Sr. to Sinatra, and an air-conditioning system so fly that, when I revved it up on beach trips, it was cold enough to kill hogs in her extended cab.

I bought her 16 falls ago, deep in the traveling research of one of my favorite investigative newspaper stories with good reporter friends. She had just over 30,000 miles, a three-year old filly in her prime. She carried me and mine and our Shelties for another 250,000 miles, work and pleasure. My daughter Molly and her friends crowded in the truck, teaching me, among other things, to listen for what rapper Eminem got right. I tried to teach them some things as well.

Peony knew the way to the Winston-Salem Journal, where I used to work. She knew the way to the coast to cover hurricanes, to prisons to interview men in cages, and to far-off story spots (back when newspapers could still afford to send us there) just as well as she knew the way to my sacred getaways, Oak Hollow Lake in High Point, the Nottoway River flowing through my hometown of Courtland (where I learned to love pickup trucks), Nags Head, Chapel Hill, Wrightsville Beach and Oak Island. Peony always carried my kayak well. We celebrated new life together at christenings and weddings and bid farewell to old friends at funerals in gardens of stone.

Last week, I salvaged what I could from her: knives, flashlights, fleece vests, paddles, books and magazines. And most important, the trinkets hanging from her rear-view mirror, including sea shells on a rawhide thong, a rabbit’s foot, American Indian beads and a tiny anchor on a braided string that a treasured friend gave me in a favorite bar one New Year’s Day. The hangings, at least for me, are what the Indians call “good medicine.” I also saved Peony’s Town of Nags Head front license plate.

I transferred those items to my new old truck, a cool 2003 Toyota Tundra that I bought from my father-in-law. I call her “The Gray Ghost,” “GG” for short. We have started on our own adventures, chasing new stories to write, including another book, and making new friends.

Yes, a pickup is just so much metal and steel. But for those of us who love trucks, it’s personal, memory-laden. I think about Molly growing up with Peony. She has two rollicking children of her own now.

And I think about the last hours of my father’s life in July 2004. Riding along in Peony through the coastal plain that night, I called him to tell him I would be there soon. “Glad to hear it, son,” he said.

I soon pulled Peony up in front of our oceanfront cottage. My father and some of the rest of us hung out on the deck, talking politics, like always. We had no idea that would be our last night with him. He died the following morning.

I kept Peony for so long, in part, because she was a link to him. And I hung on to her because I am my father’s son. He too had this thing about beat-up vehicles and nicknaming them, including a ’69 Mustang he called “The ‘Stang.” He loved her long past her usefulness.

I think my father, a lawyer always fighting for underdogs, would have liked where my truck went: I sold her to a Hispanic immigrant, a friendly guy in his 20s. It was a good deal for both of us. Viva la Peony.

JOHN RAILEY is a freelance journalist and author. He is at work on the first nonfiction book on The Lost Colony murder of 1967. He can be reached at raileyjb@gmail.com.