An important transaction, of broad-regional concern, was consummated here last week. The Franklin-based Albemarle Steam Navigation Company (A.S.N.) was sold to the Suffolk-based Carolina Northeastern Railway. Steamships owned by A.S.N., its wharves and all of its other property on the Blackwater, Chowan and Meherrin rivers, as well as the Wiacom and Bennett creeks, are being taken over by Carolina Northeastern. 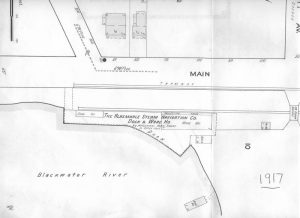 This facsimile of a map shows where the Albemarle Steam Navigation Co. Dock and Warehouse was located at what is now Barrett’s Landing in downtown Franklin. — Submitted | Southampton Historical Society

The details of the sale were arranged by John A. Pretlow, president and general manager of A.S.N. and by H. Stuart Lewis of Suffolk, vice president of the Carolina Northeastern. Headquarters for the Carolina Northeastern will be moved to Franklin, and Mr. Pretlow will be president and general manager of both systems, with offices in Franklin at 103 N. Main St. Mr. Lewis will continue as vice president. W.M. Scott, an experienced traffic-man, now traffic manager of A.S.N., will be traffic manager for the consolidated systems, with offices in Franklin. In an effort to greatly expand its service region, important railroad extensions and improved river-rail connections are contemplated. 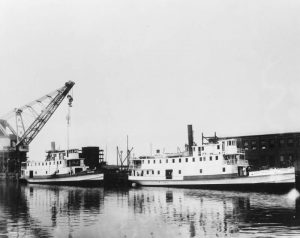 From left are the Virginia and the Carolina, both owned and operated by the Albemarle Steam Navigation Co.

The Carolina Northeastern Railway was formerly known as the Northampton & Hertford Railway, a standard gauge line running from Gumberry to Jackson, the county seat of Northampton County. That line was previously owned by Philadelphia Capital and will be extended from Jackson to Ahoskie.

Ten miles of new road have been constructed from Jackson to Lasker, and 10 additional miles of roadway have been graded; the roadbed is ready for rails — further construction is temporarily tied up on account of the European war. At Ahoskie, the Carolina Northeastern connects with the Atlantic Coast Line Railroad and with the Wellington & Powellsville Railroad. The Wellington & Powellsville Railroad runs from Ahoskie to Windsor on the Cashee River, a navigable stream. From Windsor, a leader line runs to Plymouth, which is located on the Roanoke River.

The company, for a long period of time, supplied the only major means of freight and passenger transportation to and from, and within, a large geographical area that included the counties of Southampton, Isle of Wight, Nansemond and Greensville in Virginia, and the counties of Chowan, Hertford, Northampton and Gates in North Carolina.

The Blackwater, Nottoway, Meherrin and Chowan rivers, and their tributaries, served as vital passageways.

In a recent message to The Tidewater News, John Pretlow, president and manager of the two consolidated transportation systems, said, “The company is now in the market for a larger steamship for the lower end of the Chowan River; and, further development of interest to this section is expected when normal business conditions, resume — after the war.”

• A major part of Franklin’s earliest development was the existence of the A.S.N. Its headquarters was in Franklin, and, it was in business from 1837 to 1929. During that time frame, Franklin became, and was, a major regional shipping point.

• The conjunction of the Portsmouth and Roanoke Railroad, later known as the Seaboard and Roanoke Railroad, and, still later, as the Seaboard Airline Railway, transported people and goods from Norfolk to “Blackwater Depot,” which, actually, at that time, was on the east bank of the Blackwater River. From there, starting in 1837, ASN steamships, including Fox, Bravo, Stag and Curlew, going down-river and back, completed the connection to Edenton and Plymouth and other stops along the way.

• In 1838, the depot at “Blackwater Depot” was relocated to the west side of the Blackwater River, in Southampton County. That was the onset of a settlement which, by 1838, was being referred to as “Franklin Depot.”

• The following steamships, at one time or another, were among those that were in operation between 1866 and 1929: Appomattox, Aurora, Carolina, Chowan, Clio, Edenton, Ella, Franklin, Haven Belle, Hertford, Isadore, Keystone, Lota, Olive, Oriole, Silver Wave and Virginia.

• Freight and passengers arriving at Franklin by rail from the Norfolk area, from Virginia inland areas, and by steamship by way of the Chowan and Nottoway rivers, from points in eastern North Carolina, and beyond, were transferred at Franklin Wharf. For a good period of time, in the late 1800s and early 1900s, there was a rail spur-track that ran from the main line right down to an area adjacent to the Blackwater River.

For passengers wishing to have comfortable overnight accommodations, there were several Franklin hotels. For some period of time, the Barrett Hotel on Main Street was in existence.)

• Other steamships owned by A.S.N., made roundtrips from Murfreesboro, North Carolina, by way of the Meherrin and Chowan rivers, to Edenton.

• Soon after the Carolina and Virginia steamships were built, the Coast Guard commandeered them for defense purposes in World War I.