Spirit of Moonpie and I spent the 19th through the 21st on the Blackwater below Franklin. The water was 76 degrees and a little high the first day. Air temps ranged from 65 to 87 and it was slightly more comfortable out there this trip. The humidity was not as bad and there was just that little hint of seasonal change in the air. 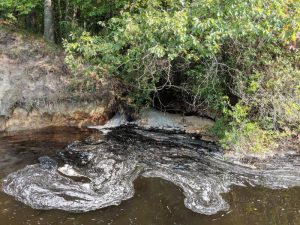 These photos was taken in the area around a waterfall on the Blackwater near the eagles’ nest at Cherry Grove. The foam is harmless groundwater that has been beat into a froth by the waterfall. Foam is created when the surface tension of water (attraction of surface molecules for each other) is reduced and the air is mixed in, forming bubbles. — Submitted | Jeff Turner

The fishing on this trip was just not so great. I had a difficult time even catching bream for catfish bait. I caught a few small bass casting and was skunked both nights on rod and reel fishing for catfish. That’s OK though, cooler water temps are coming and with that the fishing will much improve. There is already getting to be a lot of leaves on the water, a sure sign change is on the way.

Trash on this trip was light. I only picked up about 10 pounds. We did find the oddest thing though. A giant plastic planter, I mean like 28 inches in diameter. It was big enough that Moonpie talked me into pulling her for a spell in it behind the boat. That joyride ended in disaster when the towrope broke and Moonpie in this giant teacup looking thing went flying into the lily pads and flipped over. She was OK, I just had to extract some lily pad plant matter from some sensitive places she couldn’t reach! 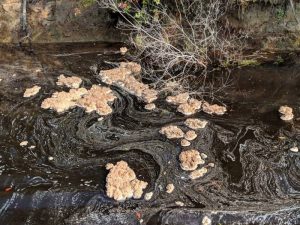 Speaking of Moonpie, the Moonpie Critter Patrol didn’t yield anything much … well anything we could see. On the second evening, just before dark, a terrible conflagration commenced back up the river a couple hundred yards. It sounded like a fight to the death between two somethings. It then stopped after a few seconds. About an hour later and 100 yards closer it started up again, this time much louder making Moonpie’s and my hair stand straight up. It was pitch dark by now so I couldn’t see a thing. The NEXT time it happened, it was right across the river from us and I jumped up and grabbed the spotlight. Once again it sounded like two somethings going at it, but I could not see a thing in the inky blackness of the swamp.

Moonpie said, “I’m done, Daddy-O,” and with that jumped into the boat’s storage locker. The terrible noise stopped after 15 seconds and I was never able to really get a handle on what I thought it was. At first I was leaning toward coons, and it might have been. However, on that last go-round I swear they almost sounded like the sound I have heard eagles make, like a broken, piercing whistle/screech chittering noise. Anyway, that is the closest comparative correlation I can come up with. Thing is, eagles I’m pretty sure roost at night, sooo that one remains one of those strange unidentified sounds on the river experiences anyone who spends much time out there at night eventually hears.

The ongoing battle against the alligator weed is depressing. On the positive side I was able to remove five patch locations from my database, as I am sure it has been eliminated from those places. However, I had to add five new places that I discovered on this trip. I reckon that’s just the way it’s going to be. It’s not that new places are popping up that fast, it’s just I’m finding places I have missed. That’s not hard to do, believe me. That stuff can mix with another type of plant that should be out there making it really hard to identify all the spots. Some of those patches are only as big as a dinner plate, but those are just as important as the large patches because it’s much easier to eradicate those small patches completely. I spend hours and hours hunting this scourge, so I sure hope it’s not a lost cause. There is a lot of other things I would rather be doing than ramming a giant pontoon boat up into places it was not designed to go and running over logs, crashing into wasp nest and snakes jumping out of the trees … and lets not forget the skeeter hordes up in the swamp. Oh, well, time will tell.

By the time you read this, it will be fall, thank goodness. I am so over the humidity we have endured this summer. So, goodbye summer and hello fall, I can hardly wait for that first campfire along one of the two rivers we call the Blackwater and Nottoway.